Arrival Day at Cape May

Parking at the Chalfonte is catch as catch can so drove around the block several times hoping a spot would open up.  Parked my car two blocks away and walked to the hotel to see who was there.  Having just arrived was my gal pal Char who was attending camp after a 5 year hiatus.  She told me her hubby was in front of the hotel unloading her equipment and would be leaving to make an open space.

OH BOY!!!!!   So ran (uh, fast walk) to get my van and 'double-parked' slightly behind Derek until he left the spot.  I shouted out my window to Char asking if my van would fit in that spot.  She and a passer by said 'yes'. The passer by (Doug Williams) said "I'm a very good parallel parker if you'd like me to park it for you".

I got out of the van and said, "offer accepted".  Do you know anyone who would turn over the vehicle filled with expensive rug hooking equipment to a complete stranger?  Har har...me either; but I did. 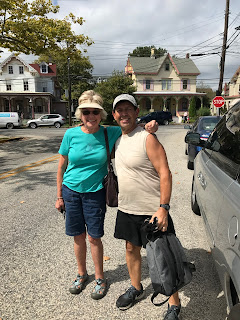 Here is Doug and me.  I thanked him, gave him a hug and told him he just helped a HOOKER.  He grinned and said, "Just don't tell my wife".  Doug is a very nice guy and told us he plays piano at one of the local restaurants.  We considered going there for dinner Wednesday evening but time passed too quickly as we were snacking, having wine and chatting so didn't make it.

Our rooms weren't ready so we three gals decided to walk the couple blocks to town and shop for bargains.  At one gorgeous Victorian house was a little yard art in preparation for Halloween. 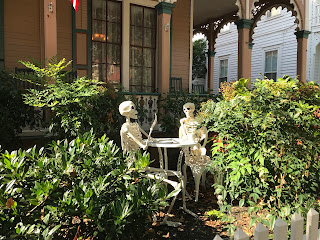 Gee, wonder how long that couple was sitting waiting for the breakfast? I see they got their coffee but where are the eggs and bacon? 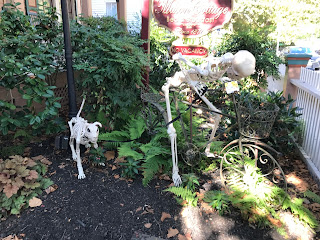 Talk about a dead-icated cyclist...he rode himself right down to the bone, as did his dog.

Have lots more to share so stay tuned for rug and 'throw down' shows as well as information about my teacher Cammie.  Won't give away all the secrets as some things are best learned from her in a class and don't want to spoil your fun.

Happy Saturday everyone.  Now it is time for me pay the piper for a week of fun.  Time to cut grass, do laundry, grocery shop, etc.