Went to take photos of the rugs in the show and my camera battery was dead.  I ran the battery down the night before walking thru the Chalfonte taking photos hoping to capture orbs.  So plugged in my battery for a quick charge and took photos of selected rugs to make good use of battery life. 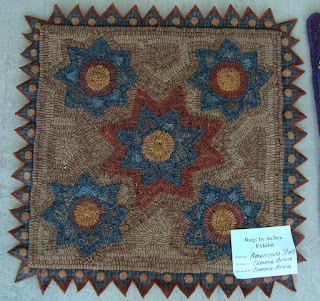 Above is a rug hooked and designed by my teacher Cammie Bruce named Americana Stars.  You should see the "wow" on the border in person. 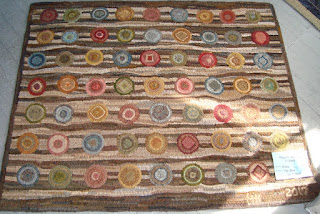 Above is a rug named Askew which is a design by Pat Cross and hooked by Lois Hilliard. 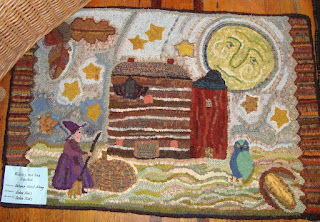 My friend Deb hooked this Autumn Hook-Along using motifs offered by Lori Brechlin on the Facebook group Out of Hand Rughookers. 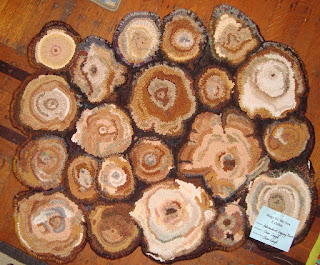 Doesn't the above rug look like the ends of logs?  It should because it was hooked by using a photo my friend Char took with her camera behind an Adirondack logging truck.   Sadly I didn't snap a picture of her photograph which accompanied the rug.

Above left is a design by Lori Brechlin and offered by Spruce Ridge Studios called Do Goode, Be Nice hooked by me last year with Kris Miller.  On the right is a design by Karla Gerard called Bloomin' Sheep and hooked by Rebecca Erb. 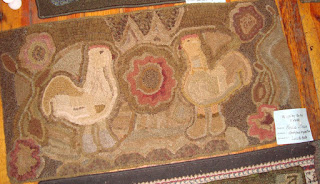 Bessie and Tessie is an antique adaptation by Lucille Festa. 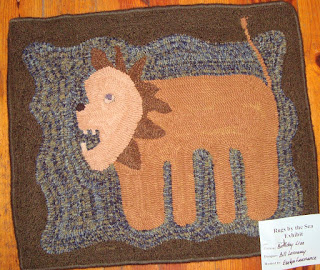 Birthday Lion, above was hooked by my friend Evelyn Lawrence and is a design by Bill Laraway.  I still  haven't finished mine yet but will get back to it soon. 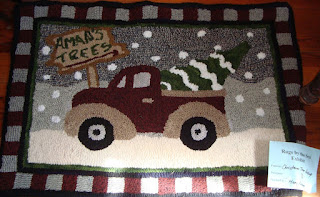 The Christmas Tree Pickup is rather obliterated for the designer and hooker's name. 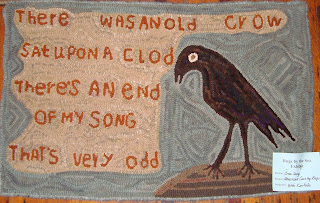 Crow Song, above, is a design by American Country Rugs and was hooked by Wini Kinkele 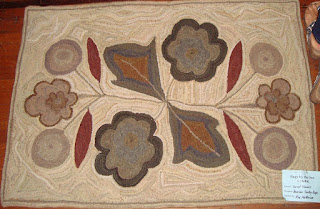 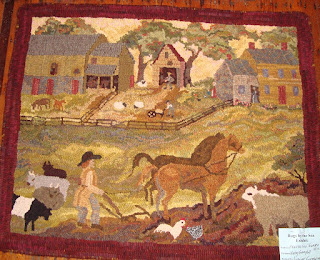 Kathy Graybill designed this Edward Hicks adaptation and was hooked by Joanne Gerwig.

This was the first class I've taken with Cammie and it was a delightful class.  I don't want to give all the secrets away but will mention the first class she gave showed different ways to bind rugs, some of which I was not familiar with.  Then there was the other class which still makes me smile as I reflect back on it.  If you have never had a class with Cammie you will surely enjoy the journey with her.

Saundra
Posted by Saundra at 2:31 PM