This is what my project looks like now.  As previously mentioned, it is an Americana Thyme design by Robin of Bird in hand Primitives.  This is a shot without a flash. 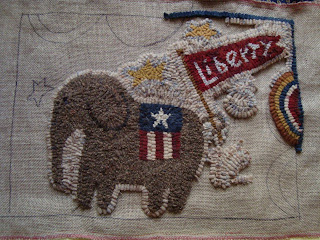 This is a picture using the flash.    I'm really liking how it is turning out, but see that I need to release some pressure inside the swag on the right side because it  is bulging out too much.  And, now that I'm looking at the pictures better, think that I'll remove the white in the swag and replace it with more blue.  I think that would look better.  Maybe I'll do that now and then update my blog a little later today. 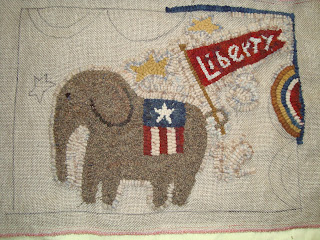 I think the background is working better than I'd originally thought ~ or at least it does in person..... that's my story and I'm sticking to it.
Posted by Saundra at 2:44 PM