This morning I planned my day while making my coffee.  I was definitely going to pull some loops on my Lions in the Woods, draw out a Frost Sheep pattern AND use up some already mixed dyes.  In the past there were a few times there was more liquid left over than the wool required so kept them in jars in the garage with the name of the recipe on top.  There must have been maybe 6 jars but I only used two colors today.

One color was called Hooker's Gold and is in a Barb Carroll book entitled American Folk Art Rug Hooking.  Sheesh, I can't remember how many years ago I used this recipe but figured it was time to use them up or throw them away.  And mama told me to waste not want not.

These are the wools used and there is approximately 1/2 yard total of all the wool and used approx 8 tablespoons (all there was) of the Hooker's Gold dye.  I started out using 4 tablepoons but when the water was almost clear it was obvious it was not making much of an impression so dumped the other 4 tablespoons in the pot and stirred. 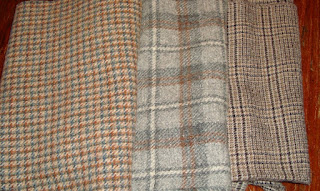 This is the result of the dye job.  And unfortunately they are put out of order but think you can tell which piece of wool relates to the two pictures.  And the flash makes both of these pictures appear brighter but must admit that I will use the bottom wool before I'd use the above wool. 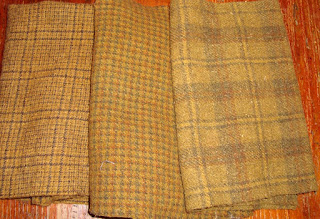 When looking at the names of the dyes on top of the lid also chose one called "Warm Sky", it is from the dye book Beautiful Wool by Laurice Heath.  Much to my surprise when I looked inside the jar everything had dried up.  It even looked like salt in the bottom of the jar.  But when I put water in the jar it came to life again.  I do not know why this happened but when the water was added it came back to it's strong intensity.

This is the wool I started with and there is approximately half a yard there. 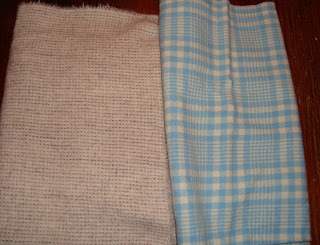 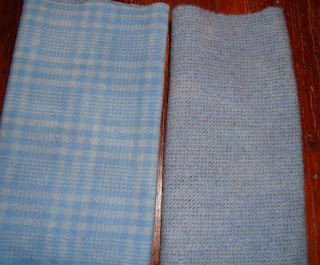 With the dye left think I'll pull a little more wool like that lighter wool and other light colored wool.  I'd really like to use this up before it crystallizes again and make use of wool which needs color and then I can bind them together with the different textures with a name tag they were in the same family.
Don't know about you guys who dye, but there is something about warm wool and vinegar which I like.  But when I was married to my ex, he would come in the house and ask me, "what stinks?"  And me?  I like that smell.  I do use citric acid sometimes but today just felt like having that nice aroma in the kitchen.
And now for the hook'n part.  Sorry if it is too boring to continually see updates on my Lions in the Woods rug but this is what it looks like now. 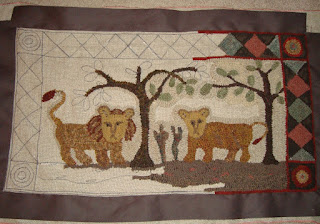 One other change I made was in the red tail in the lion on the right.  My teacher suggested using red since I was using it as the border and in the pennies so for that lion the red for the border trim is what was used and I thought it looked too bright.  So pulled it out and put in a little darker wool with red in it.
Hope to post more before the new year and also hope to post more in 2013 than I did this year.
Happy Holidays everyone and please have a safe New Year.
Saundra