Oh my, don't we all need MORE time?  Was sure that once I retired there would be more time to accomplish what couldn't during a work week.   Eventually it appeared that even with retirement I wasn't as productive as hoped with all those free hours each day.

Now (I'm actually chuckling to myself now) it seems that not only is my house not as clean as it used to be when I worked.... but am not able to hook all those rugs lined up in my stash.

SO.... as there is only minor accomplishments on my Magdalena Goat, enjoy a MINI rug show.

The rug above was depicted to be early 20th century with a leaf border and located in Providence, NJ.  Sure looks in mighty good shape to me unless it had been framed. 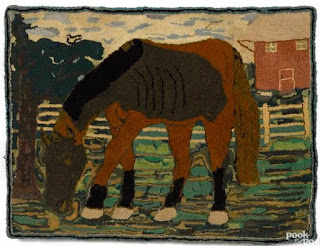 Another early 20th century hooked piece is the 'sorrel horse' and farm scene.  As a teen I owned a sorrel colored horse named "Richie" and he had a couple white socks. 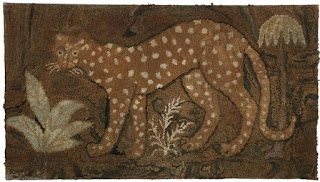 The above rug was presented on the auction site as "Jungle cat late 19th century with Gallery of Graphic Arts label attached". 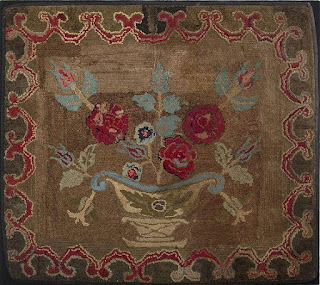 The Floral in Compote above was a North East Auction house.

Okay kids, need more time to work on the Magdalena Goat.  I'm down to the right left corner and working my around.  Am still in awe that my pal who wishes to remain nameless and drives me crazy with that... drew and hooked her version in less than a month.  I'm way over that time.

Weather today was near 80* and tomorrow will be close....BUT. the rain, wind and 'unfriendly dog' weather starts Thursday.