Wedding Rugs at Cape May

The wedding rug that Char hooked was humongous.  The rug could easily have accommodated the bride and groom, both sets of parents and even more of the family or friends with room to spare.  It must have been a real challenge for her to hook as the dimensions and weight of the rug increased. 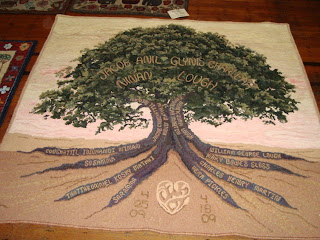 The groom's family was in awe and honored that their family names were forever recorded in the hooking of the heirloom family tree and wedding rug.  The two dates at the bottom were for the two separate wedding ceremonies; one which was a traditional Asian Indian ceremony and the other a traditional American wedding.
This rug below was hooked by designer and rug hooking teacher Bev Conway.  As you can see the flowers and leaves are beautifully shaded and an outstandingly beautiful rug.  So you are wondering.... since it is a wedding rug, where are the dates, initials, etc? 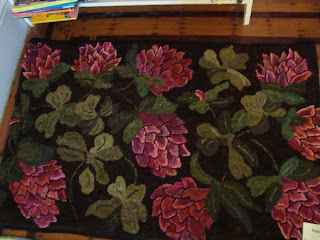 You know how sometimes you want to hook your initials and date in the rug but there just doesn't seem to be enough space or a proper place to hook them without distracting from the appearance of the rug and design?  Well that is the technique that Bev developed and held a secret for a couple years as she experimented with and perfected a new way to sign and even capture a message in a rug.  It can be done without destroying the beauty of the top.  Bev even consulted with seasoned hookers and teachers to find out if this technique had ever been recorded or seen done previously.  The unanimous answer was 'no'.  None of them had ever seen this technique performed or known to exist anywhere.
Now, I'm not letting out any secrets as Bev was quite willing to share her technique with her students as well as those of us who sat at the same table with her during meal time.  By the end of the day of the show I'd expect there were some 50 women who learned of the technique even if they had not been in Bev's class.
The full message hooked says, "Life isn't measured by how many breaths you take, but rather by how many times it takes your breath away."  2010  Ashley Jeff   All my love bmc
Isn't that just SO romantic and lovely for a mom to hook for her daughter and son-in-law? 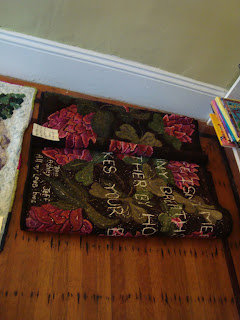 So now, I want to put my initials and date on the back of the log cabin rug I started last week so that I won't need to worry about destroying the ambiance of the design on the front.
Happy Hooking everyone.
Posted by Saundra at 2:31 PM