Textured wool really does make a rug look aged, a prime example is the Kinderhook Basket I hooked with a little help from my friend Barb Carroll in her class.  Just adore the rug, the colors and the fond memories it gives me when I see it every day.  It hangs in this room; it is a design offered by Woolley Fox. 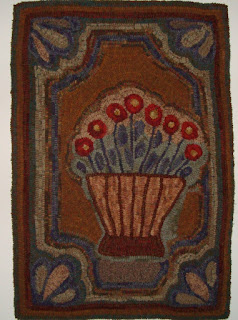 Textures can also be used in whimsical designs too.  There isn't one piece of flat/plain wool in Nantucket Broom Ride.   Here are some pictures of what I've used.

The picture below shows the background wool (called Pluto by Heavens to Betsy), the first purple was used for the hat, second plaid for the dress and the third piece of texture was the thin outline around the witch's hat and dress. 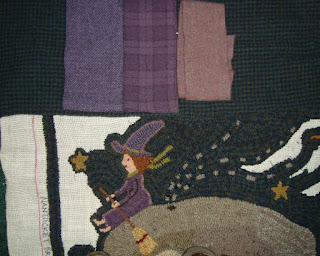 Originally I'd hooked grey hair on the witch but now she is a beautiful red head and the texture on top of the background wool is what I used. You can see that I also re-hooked the spout as the sparkle didn't show up as I'd hoped it would. 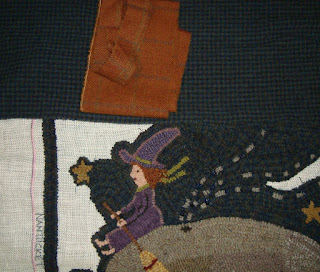 The houses were hooked in the following textures.  I know the red seems bright in the photo but guess the dark spot managed to come forth more often.  To the right of the red is what was used for the ground color....a little of several earth colors which makes for a nice earth and grass color.  The lighter sections of the gold on the right is what was used for the mustard house.  That too came from Betsy. 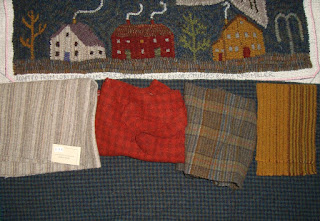 For some reason I couldn't put my hands on all three of the wools that were used for the whale but could find the tail section I used.  That was part of a jacket that was found at my local thrift shop.  Can't remember if it was a woman's or men's jacket but it worked just fine.  However, mixed strips of that with another wool in the whale so that the tail wouldn't be too light. 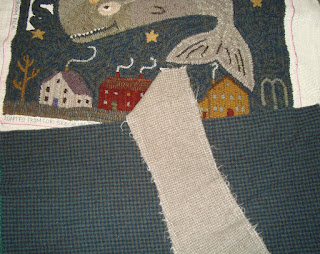 So textures can be used successfully even in whimsical pieces.  Must admit I was hesitant at first but Barb helped me see how they can be used and I often reference the rugs hooked in her class as lessons when I need one.


Saundra
Posted by Saundra at 5:45 PM