Travels of the Witch on A Whale and other stuff

Since today I'm feelling more normal will do more of a post, sorry that I've been in outer space for a while.  Mama ain't happy with the numerous lines of color around the small witch with the outline to define the arm and the halo effect to separate the so close in value colors of dress and background.

Personally I feel witches wear either purple, black or grey dresses those are my choices.  Well can't be black, can't be grey because the whale is that color and so is the witch's hair.

In the picture below you can see the background wool under the 3 purple choices I pulled from my stash.  The first two seem too light to me and the wool on the far right is the same wool as is in the roof of the first house which can be seen with the background without a halo.  It may look brownish in the picture but is a purple.  If I use that then I intend to give my witch pointy green shoes like her scarf color. Otherwise the black shoes would need to be haloed  or would have to give her flesh colored feet. 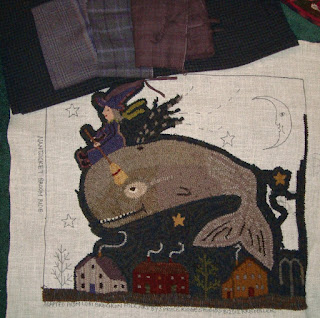 Oh, I put a couple of those far right purple strips on the witch's hat so you can see what it will look like.

Now the 'other stuff'.  Many have asked how I am feeling and thank you for your concerns.  This was way different that the two day flu like illness had previously but was afraid to say I had a bacterial infection (aka Cellulitis).

Was asked if I got the infection at Cape May and the answer is an emphatic NO.  This was an injury caused by my beloved dog Ben who wants to kill cars.

On 9/25 he thrashed about with his metal collar or head hitting my arm numerous times attempting to pull away and chase a moving vehicle. Ben has no fear and heads straight toward the front tires.

Went to walk-in urgent care, the x-ray showed no broken bones.  But, I had cellulitis (aka bacterial infection) in my arm.  The arm was feverish, really red and painful.  That night my fever (at one point) reach 102.5 and think it was higher than that previously because I blacked out, in a standing position holding onto the fireplace for 4 hours until I reached a certain level of consciousness.  So I am on heavy antibiotics, called the urgent care about my comatose like symptoms the next day and they said it was due to high temperature.  My temperature has stabilized and take the temperature often so I don't black out again.

So, I’ve put new batteries in the shock collar and while I thought it inhumane to use before have now changed my mind.  I’d rather he get the hell shocked out him for a second than me with a potentially deadly infection once again.

Have a good evening everyone.  Am getting ready to hook on the rug for the first time today.