Hallelujah!!!!!  Today I pulled the last loops on Magdalena's Goat.  It was started February 15th so it took me 2 months 2 days to complete. My friend Evelyn Lawrence hooked her version in less than 1 month, but she is passionate about Magdalena.

Here is what mine looks like before steam pressing.  This picture was taken with a flash inside and NOT as bright as this is in person. 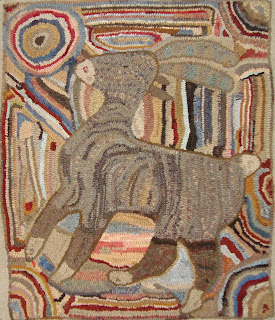 Soooo, took the rug outside and here is another version which is closer to what it looks like in person.  If any of you are attending Cape May rug camp second week you will have an opportunity to see mine as well as Evelyn's. 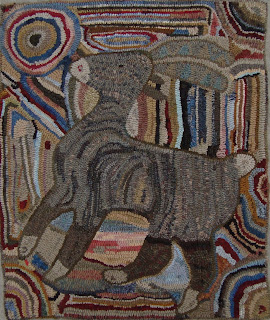 When I first alerted Evelyn I'd found a new Magdalena rug and sent her pictures from the auction site, she asked that I let her hook hers first even before showing the 'find' on my blog.  Well of course I would do that.

Evelyn drew the design and like a work horse finished hers in record time under 1 month for this 29 x 35 design.  So here is the first reveal of my friend Evelyn's work. 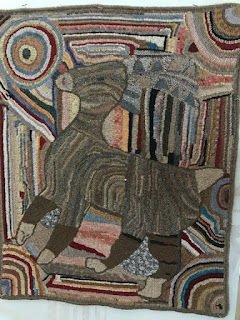 For those of you who may not know, Evelyn is the person who researched the history of Magdalena Briner Eby who is presently known as the most prolific rug hooker of the 1800s.

So you don't have to scroll down thru old messages, I've provided a photo of the original Magdalena Goat rug which was on the web auction site. 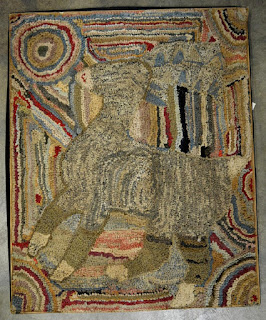 Now the other work begins..... now to clean and separate that rats nest of worms and clean up the place.

Have a great evening everyone.

Saundra
Posted by Saundra at 6:42 PM