These are the rugs hooked so far this year.  Well of course the first one would be the White Horse and Scrolls antique adaptation ~ sure do love horses.  If interested I'll draw this whatever size you want. 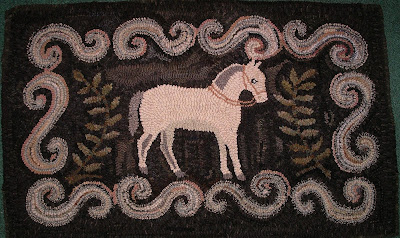 After finishing the horse I offered a textile challenge to anyone who wished to join me.  The Tattered Tulip was chosen as my project like most all the other participants.  If you are a new reader of the blog you can read more about our adventure HERE.  We were also featured in the August/September issue of ATHA Magazine. 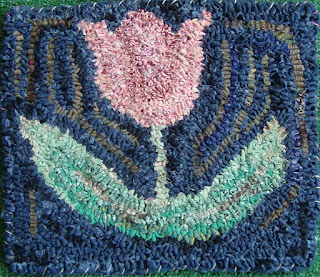 Initially my  plans were to hook this Patriotic Shied using something other than wool.  But stopped in my tracks and chose the tulip instead as it was smaller and decided to hook the Shield with soft wool. 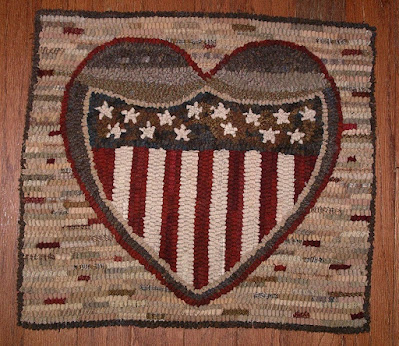 Next on the frame was another antique adaptation Black Tailed Jackrabbits. 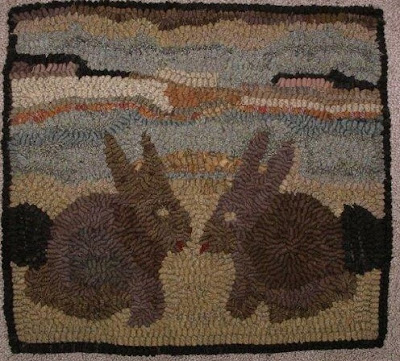 Then another small project to put on the wall near my hooking spot ~ Potted Plant antique adaptation. 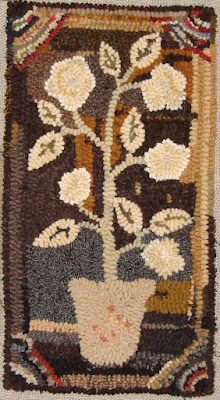 Sadly many of our Police Officers have died in the line of duty but some have been killed just because they were law enforcement.  Yet those are the people that IF you were in fear for your life you would want to come to your aid.  I was saddened by each and every news report of such events.  But when Cpl. Keith Heacook from a neighboring town was murdered viciously, that is when I drew out The Thin Blue Line flag. 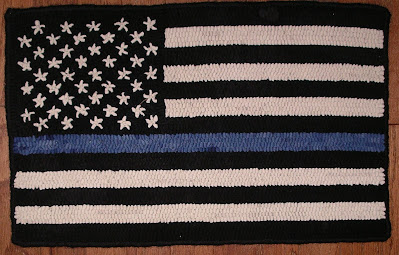 Something more uplifting was chosen next ~  a Ben profile memorial.  I hung it on the wall over his ashes as soon at it was bound.  He is  hooked mostly in #8.5 with some other sizes as needed. 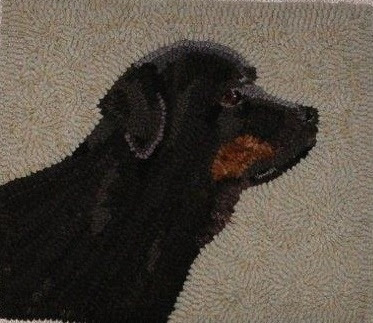 Patsy Becker's Jewel Basket was the 8th pattern on my frame and the second time I hooked it.  First pattern was purchased the year I took a class from Patsy, but a couple years ago purchased another from Wool and Goods who carries her designs.  I did tweak just a smidge. 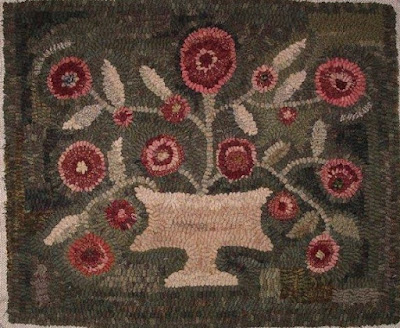 More recently I designed and hooked Ox Farm; it will go to Cape May with me. 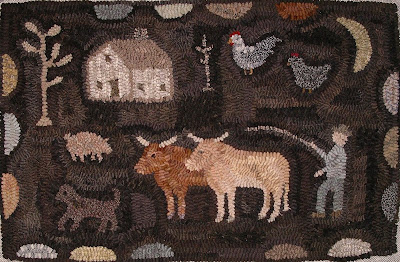 And finally, all hooked and bound Magdalena's Rooster, Duck and Horse will travel with me to Cape May as well. 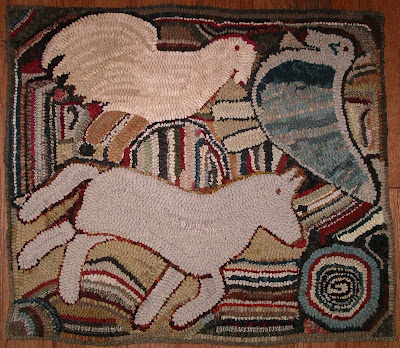 I've shown you all the rugs which have been hooked since September 2019 when I last attended Cape May so now need to cull the number down to a realistic number to take.  So far I've got the number to 13.  I believe there was a year when I took 10 rugs and they were all in the show but don't know if I'll be that lucky this year.  If not I'll need to make a cut before the show opens to the public.
Meanwhile, I'm still working on the small Sunflower Duo and Lisa's Grey Horse.
Happy hooking.
Saundra
www.woodlandjunctionprimitives.weebly.com
Posted by Saundra at 3:17 PM