Today is June first so all challenge participants are to post a current picture of their progress.  So I just did the corner which still might have to be changed.  I toyed with the idea of doing a hit and miss with the huge corner of 2 plus triangles, considering that a way to anchor down the look of the rug.  But didn't think it would look right.

So I decided to do 2 triangles on either side with a narrow section with some sort of design in it.  Frankly I don't think that blob of wool hooked into the corner looks right so will probably, eventually pull it out and do the whole corner in the light wool.  UNLESS someone has a light bulb moment they'd like to share with me that I hadn't thought of.  And I am open for any and all input. 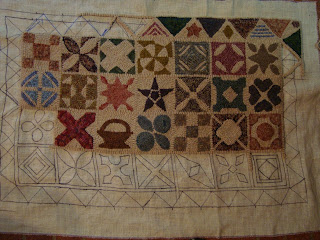 I took two pictures ~ one with flash and one without.  One shows the colors too bright and the other a tad darker than they really are.  So think 'somewhere in between'. 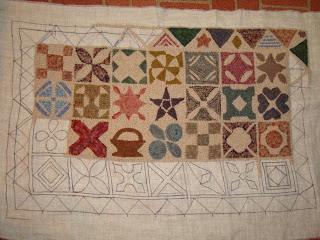 Well for sure those corners ARE my greatest challenge.
And now, an update to my dear new floor stand.  I wasn't able to use it last night after all.  When I purchased my Snapdragon mine was the first one made to accommodate a wooden swivel ball for the Rughooking101 floor frame.  I provided Sue with the dimensions of my yoke and circumference of the ball and voila....my Snapdragon was born.  I've been happy for several years using it on the other stand until I saw the adjustable one my friends had.
So, when I assembled my Snapdragon on the floor stand, the yoke and base of the frame were flush.  The reason is that the wooden ball used on my other floor stand is 5 3/4" in circumference and the black rubber ball on the new floor stand is 4 3/4". 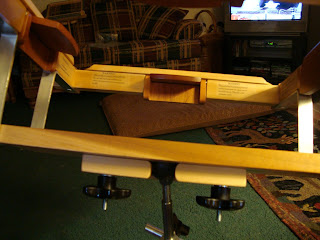 So I wrote to Snapdragon to see if I could get a new yoke and perhaps even a new wooden base.  I was told that I can purchase that and they provided instructions on how I would replace the aluminum legs from the four corners of the top.  Hmmm, why not just replace the wooden base as the metal framing is just fine; that way I won't be tampering with a more fragile part of the four corner assembly.
I've written to them again for enlightenment but know that Sue had an appointment this afternoon so guess I won't find out the answer until later.  But it just seemed like an unnecessary expense to buy all new metal framing when I like the distance this one has but only need the yoke and wooden base.
It's so terrible to have a new toy and not be able to use it. But sheesh, it isn't as if that is my only option of a frame.... you gals know how that is as we have ALL the toys and back ups for the back ups.
Posted by Saundra at 2:41 PM