A View from Afar

I removed the design from my Snapdragon frame (jut love that frame because it keeps the backing drum tight)....anyway, wanted to see what it looked like on the floor as well as in a picture to see if anything shouted at me.  So thought I'd take a picture to share with you as well.

Previously I told you that this rug was a great opportunity to use of woolie wormies, and it is.  The funny thing is that the rabbit is hooked with probably all that exists of a tan and off white wool.  I went thru my worm baskets and bags several times looking for just one or two more strips so I could finish the rabbit.  Each trip rendered a couple more small strips and luckily my final search found two pieces which finished it off.  But, had I not found any more of that same wool would have 'made do' by putting something else in.  You know that old saying:

This is what the Big Dog Hollow looks like now.  As mentioned in the previous post the design measures 27 1/2 x 34 and was a great pattern swap that Kathy of Briarwood Folk Art traded for one of my Frost Sheep designs. 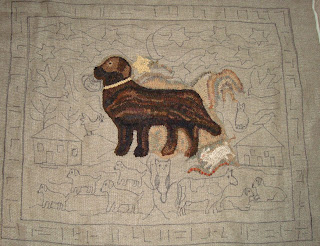 I sorta want to hook the owl next but guess I should work on stars and sky so that the star color can be decided before I get too far along on the critters.  When looking at the pattern up close the rabbit seemed a little invisible with the background but can see now with the flash that it shows up just fine ~ even a little bright in the picture but think I'll keep it like this. And not sure what wool I'll use for the sheep.  There I go thinking about the critters again.

Not sure what I'll do for the border.  It would look great to do it like the original shown here but am sure it would be a pain filling in around all the circles along the sides of the curvature. 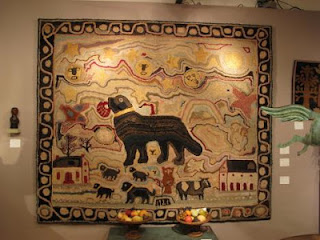 Have also considered just a primitive dark border, no design, but more of a framing around the rug.  But it is way too early to decide that and perhaps the further along I get the rug will decide for me what it needs.

Thanks for dropping by.

Saundra
Posted by Saundra at 10:51 AM