Update on Ben and Shadow Profile

This morning I received a phone call from Ben's vet as he had just opened his mail and Ben's lab results were among the delivery.  Lab reports that there is no sign of lymphoma, no sign of cancer, the red and white blood cell count in the spleen sample was normal but it was a reactive spleen.

What the vet told me about "reactive spleen" is that Ben may have had an intestinal bug or similar illness which made the spleen enlarge but didn't interfere with his behavior.  So I am to continue Ben with the broad spectrum antibiotic until it is gone and Ben should be good until his next visit.  So FANTASTIC news about the health of my handsome boy.

OH!  Something else about my vet.  When I brought Ben home from the vet the other day, after sedation, noticed that all his nails had been trimmed and there was no charge on my bill for that.  Now, Ben will let me cut his nails but admit they did need the tips cut.  When my vet called this morning with the good news I let him know that Ben's nails did not go unnoticed and that his care for his clientele is magnificent.

Now to my girl Shadow's profile.  I used some of the found similar dye wool to fill in spots to the right and it is hardly noticeable, so that's good. 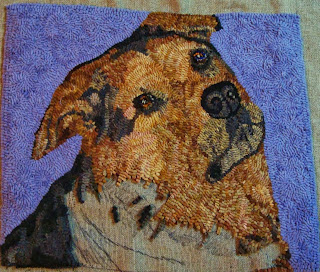 The ear to the left I re-hooked (to hopefully give it more depth) and it probably could use a little more tweaking but I'm not going to bother with it, at least right now.  Frankly, the eye to the right (Shadow's left) needs to be honed in better but hey, I've open linen which still needs to be hooked and I'm not making progress if I'm still pulling out and hooking something back in.
So I'm taking Shadow back off the frame and putting a more relaxing project back on my frame.  I figure that at this speed, if I hook a few loops every week Shadow might be done by spring.
Finally today I was forced to turn on my heat due to the low temps and rain.  The thermostat is set on low but at least it will take the chill out of the rooms.  Yuck, winter will soon be among us.
Hope you have wonderful weekend everyone.
Saundra
Posted by Saundra at 6:31 PM

Email ThisBlogThis!Share to TwitterShare to FacebookShare to Pinterest
Labels: Ben the Rottweiler, Shadow dog in a wide cut