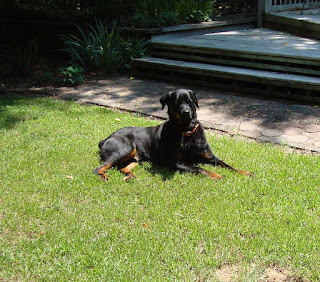 I had to leave camp yesterday ~ a day early.  Just before lunch I received a text from the Kennel that Ben didn’t get up and greet JoAnne (the owner) as he usually does in the morning.  Ben didn’t even get up to eat his food so she pushed the bowls closer, he ate and drank water but didn't get up.

Later in the morning she wrote saying Ben wasn’t himself, had growled at a customer who petted him and snapped at her.  Said she couldn’t keep him in the future and would I come to pick him up tomorrow (which would be today) as early as possible.  She was assuming it was an aggressive and unprovoked behavior.

However, I’d provided medication for his arthritis in case he would be in pain from playing with the other dogs.  Said she gave him half a pain pill, which was a vet prescription

He had been playful with other dogs one-on-one play in September and she sent me a video of him playing with a brown lab named Lucy on Monday.  And on Tuesday sent a photo of Ben with the caption "Ben likes Lucy's mat" as he had commandeered it (below).

p.s.  sometimes Ben's lip will stick to his teeth and he looks goofy.  Each dog has it's own space but will let two play in one area while cleaning the other 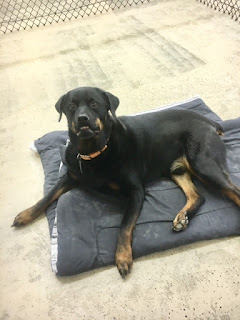 So texted her back saying I was going to lunch and keep in touch.  Came back from lunch yesterday to read that her husband said Ben must be hurting and didn’t think I should let him stay there another day…. could I come pick him up now.  The girls in class and Eric Reed (Betsy’s husband) collected my class room stuff and I went to clear my hotel room.  I'm thankful for the gathering of friendship in a time of need.

Texted JoAnne there was no room in the vehicle with my hooking stuff so would come home, unload then drive the half hour to pick him up so couldn’t be there until around 4.

After depositing my items at home then texted JoAnne I was on my way.  She said, “good, I finally got him to stand up”.

As I was pulling into her yard could see her walking back to the kennel with an older man and female neighbor …JoAnne was crying.  OMG, my heart sank,  as I figured it must be about my boy Ben.  Ben had died.  His body was still pliable but cooler so had just happened within the span of half an hour.  What a shock!

The two neighbors kindly drove Ben to the vet hospital in Georgetown so I could pay to have him cremated and ashes returned.  I’d never have made it to my vet in Bridgeville in time for closing and what could I do with his body by myself. 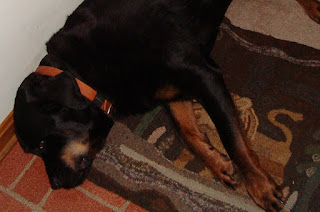 I have a video and a still photo of Ben from this week that JoAnne sent during the days he was happy and active.

Ben had his senior wellness on 8/31/17 and his blood work was good as were his vitals.  But on November 8th Ben really didn't feel well in the morning.  He was NOT a mean spirited dog who would snap willy nilly.  So think he can be forgiven for the growl and snap as he was obviously not well.  I cannot imagine why he died but he was over 9 years old which is about the life span of a big dog.

Of course I am grieving and have already shed a bucket full of tears.  But I am a glass half full type of person and look for something good of a situation so as to not go into depression.

Ben was active to the day before he died, he didn't have a long and/or painful life; fortunately I had the help of JoAnne and her neighbors to assist transporting a heavy dog to the vet whereas if he'd passed at home it would present problems for me.  While I'm sad Ben didn't have the comfort of his mommy at the time, perhaps God was looking out for my best interest and took him early so I would suffer less.

OMG, I will miss him and the silly things he did which made me laugh.  Every time I cut a vegetable and he hears the sounds will come running for the ends of celery, the ends of zucchini and white hard parts of Romaine lettuce ends....and so many other fond memories.

Think he will be my last dog as it will allow me to go to camps without worrying about who will take care of him or her.  My heart is very heavy...give your dogs a big hug and enjoy your time together.

FYI, tje kennel did NOTHING wrong.  I was pleased and will give references for it with every aspect of her kennel: climate controlled, huge individual runs with doggie doors to fenced in area, plays music to sooth the dogs, has a video camera and voice to speak to the dogs when she is in the house...AND a very spotless kennel.

No more fences for you Ben...run free and play hard at Rainbow Ridge sweet boy.  Please say "hi" to Shumba, Panzer and Shadow for me.