Can't believe I'm making my second post on the same day and then other times go a couple days before making a post.  But after this morning's post decided to extend  the dress on the right bottom as well as see how it would look with a beauty line in an area at the top.  I didn't want to pull out any wool to do it so used up a spot already open. This way if I don't like what I see when I post the final picture it will be no problem to pull out the orange and replace with black. 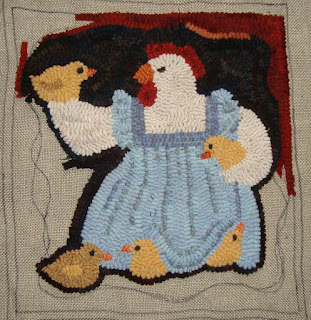 Oh  my, right now my thoughts are to not have the orange beauty line and having a yellow would be even more shocking to the eye.  When colors of a beauty line were rolling thru my head (like visions of sugar plums) had considered the darker blue but then there is so much blue in the center already wondered if that would be too much blue.  OR, would it pull the mat together? Maybe, just maybe I'll try a little of the darker blue in another section.

It's now Thursday and I'm updating with a picture of the blue replacing where the orange was just to see a comparison. 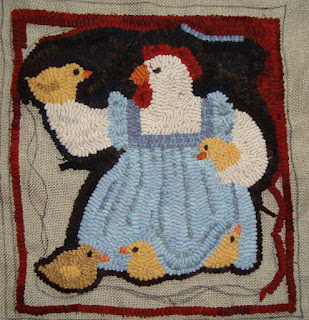 And again with a piece of red laying on top of the blue to see it with just the red border. 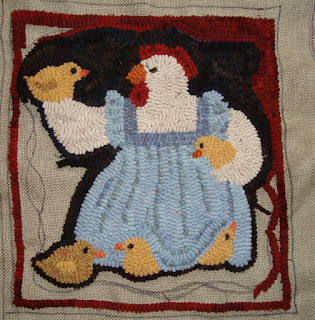 I'm wanting to get this done so that I can go back to Big Dog Hollow and almost considered putting Mother Hen aside to work on it again. BUT, since this is a small design should finish it up an post it on my web site.
Okay, the GIVEAWAY will be for this pattern drawn on Dorr Natural Primitive Linen and will be the design eventually decided on, but think you can see where the design is going already, it is just a matter of you choosing your own colors.

The finished design appears it will measure  14 x 15 1/2.  I will choose the name on Monday.  The requirements are:

~ Be a Follower
~ NO 'no-reply' addresses
~ NO 'anonymous' posters

And not required or expected but would LOVE to see your finished piece when ever it is hooked.

Thanks for visiting and putting up with my ranting and raving.