Are you tired of looking at these show rugs yet?  I thought this would be the last posting of rugs from the show but there are still more to come another day.

I love, love this primitive rug, the colors, and it looks SO OLD.  This has got to be a rug for me to hook in my future.  It is an antique adaptation drawn by Lucille Festa and hooked by Anndee Byers.  Anndee did a magnificent job making it look old. 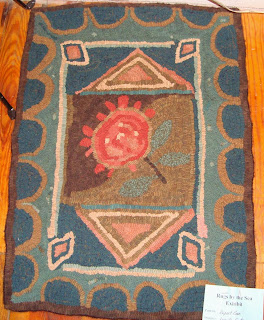 A designed and hooked by Lucille Festa, this is called Asta. 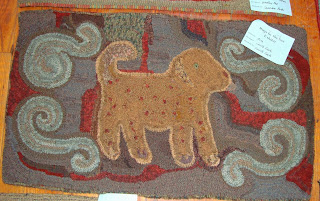 Below is Cabbage Rose designed by Woolley Fox and hooked by Polly Reinhart. 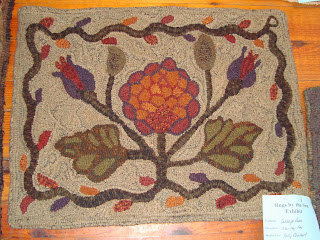 The Stars and Fans was also hooked by Polly Reinhart and a design by Sally Kallin. 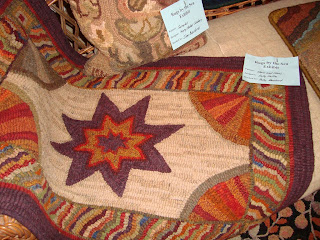 This pattern is by Lucille Festa and hooked by Stella Rhode, it is named Mini.
Below is 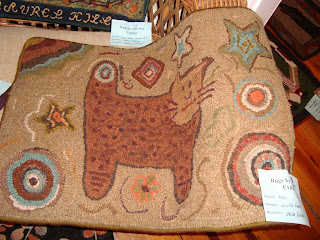 You followers had watched my progress on this design by Barb Carroll of Woolley Fox, it is called Oh Deer and I began hooking this past May. 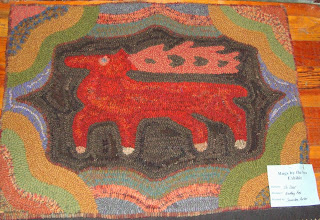 This is a happy rug named Glorious Sunflower, designed by Margaret Shaw and hooked by Pat Donoho.

The top mat is called Mother Hen, hooked by moi and designed by Woodland Junction Primitives.  The one below is called Santa and Sheep, a design by Maria Barton and hooked by Vickie Lavigna. 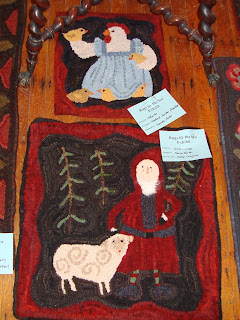 This rug is hooked by Joanne Gerwig but unfortunately I cannot make out the designer name. 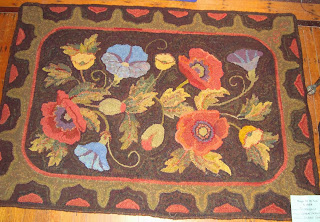 This is another designer you will recognize.... yup, Sharon Smith.  She has the cutest whimsical designs.  It is called Purple Rain and is hooked by Diane Martin. 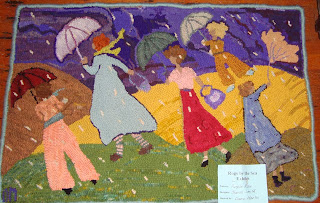 In this grouping is a snowman piece called "Light the Night", designed and hooked by Janet Reid; Chicken designed by Lucille Festa and hooked by Nancy Quigley.  The other piece I'll show a better photo of next. 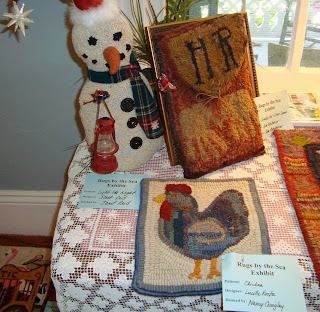 That is a hooked "Envelope for a Silver Spoon" designed and hooked by Jane Bescherer.  Quite an heirloom I'd say. 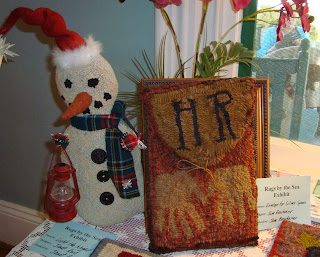 On the same table was Jack, a design by Barb Carroll and hooked by me.  The Santa on a Spring was designed and hooked by Janet Reid. 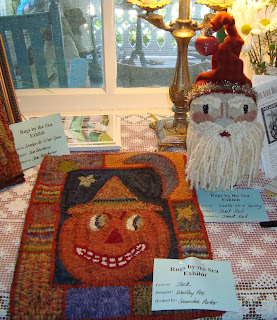 This colorful piece is called Who Won, it is an adaptation hooked by Jan Finger. 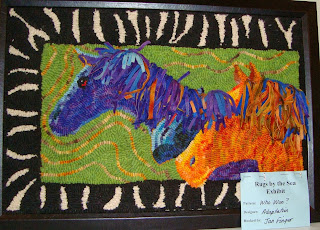 This rug below named Tropicana was a design by Carole Feeny and hooked by Diane Stoffel. 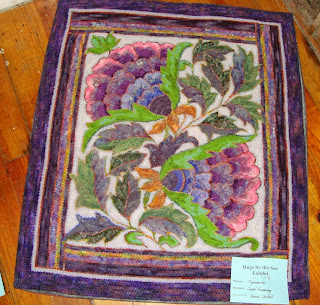 The proddy pieces does not have the impact in this photo which it presents in person.  OMG, it was magnificent to look at.  Sally D'Albora aptly named it Sunset on the Ocean and obviously designed and hooked it herself.  She said she wanted to do a proddy piece and got it out of her system to never do again.  Every one of her proddy pieces were the same height.  Hope you get to see it in person one day. 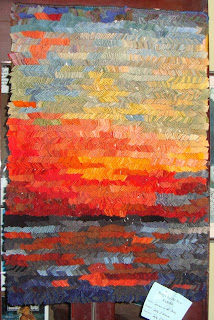 The label on this rug is hard to read so cannot determine the name or who hooked it....sorry. 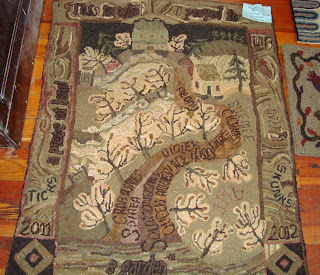 Thanks for dropping by and hope you are enjoying the show.  Stay tuned as tomorrow I'll post a few more.
Saundra
Posted by Saundra at 10:19 AM