Yup, unfortunately I got snow too.  Thank God it wasn't what Canada endured but I'm not in favor of this either.  The weather station yesterday said we would get around 2" - 4" for the Seaford area and learned we received between 5" - 6".  From the looks of my photos was sure it would be over 4" in height by what was on top of the table, bird bath and the deck railings.  Hope my pond netting doesn't collapse and trap my fish.  It is totally covered so will have to go out and see if I can brush it off.  I did brush it off before going to bed last night but it continued to snow all thru the night. 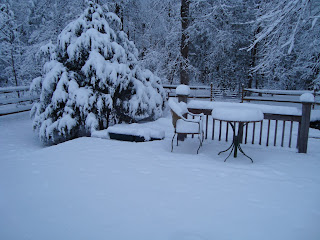 ﻿
I hate snow.  Yes it is pretty but it is bothersome for me since I'm the one who must shovel it and deal with the build up on the pond net, walking Ben in it, and beating the trees so the weight doesn't make them snap off. 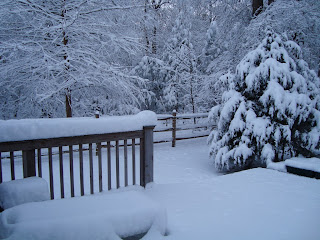 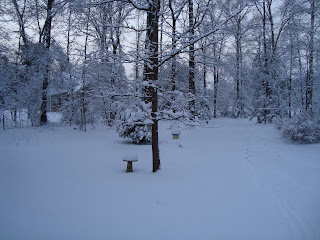 The heavy snow is weighing down the pines and when the wind picks up wouldn't doubt if trees come down over some power lines in the area to cut off electricity.  Thankfully I've a propane gas log fireplace if that happens so Ben and I will sleep in the living room for warmth. 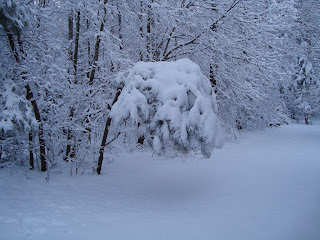 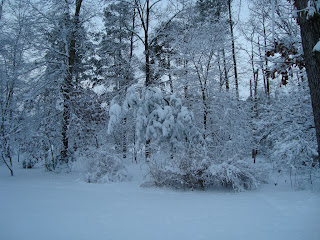 I tried walking Ben after his breakfast but all he wanted to do was run in the snow and kept pulling me along.  He never did take care of 'business' so if he has to go, he will just have to endure the back yard as momma is staying in the house and going to hook.

Hope you are staying warm.

Saundra
Posted by Saundra at 8:44 AM

Email ThisBlogThis!Share to TwitterShare to FacebookShare to Pinterest
Labels: snow in Seaford