September First and some Rugs

Wow, time really flies by big time.  Hard to believe that today my grandson Zach is having his first day as a teenager.  Here's my handsome grandson. 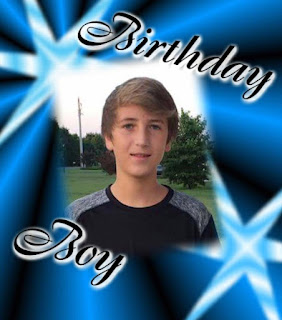 Now to some old rugs to entertain those of us hookers out there.  Don't worry, I'll bore you with an update on my eye doctor appointment later so you can decide when to stop reading, lol. 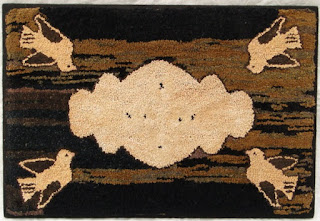 The above rug was quoted on the auction site as being a 19 century threshold rug with birds. 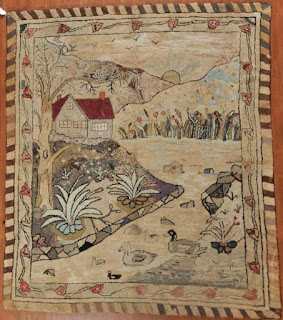 This is an 1880 landscape which has faded but bet it was a beauty in its day.  It has two borders which I believe at the time would have been quite an artistic venture. 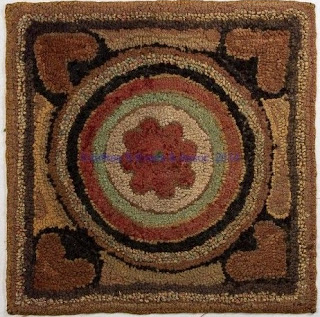 What's not to like with hearts, penny circles and flowers?  Auction site said it was given the age of between 1880 and 1900. 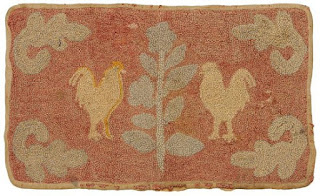 Another old faded rug of a primitive flower or tree center, two chickens and primitive scrolls for the corners.  You can see the hooker used cotton binding to cover the edge of the burlap where we would either whip the edges with yarn/wool or bind on the back rather than the edge with such a thin piece of cotton to take the wear.  We've learned a lot over the years, better products available and more affluent times.

Bob and Rose rug is said to be an early 20th century rug and guess that hooker had lots of worms to use up in that hit and miss just like us.

Sorry it is such a short show guys but at least it provided a little eye candy.  So close to finishing the binding on Ned and so close on pulling the last loops on the turkey rug so want to get back to both since I've been gone a big part of today.
Okey, boring eye information........Since having new floaters and flashes in my right eye had a visit with the eye doctor again today.  They took pictures of the back of my eye and checked it out thoroughly to be sure it wasn’t a retina tear.  Thank God he said it was just normal aging of the eye.  He also said that within the next two weeks the flashes and floaters will lessen but also the brain adapts so those images are not as prominent.  Amazing how the brain works… I mean it makes sense because a person with other deficiencies develops strengths in other senses.

Thanks to all who gave their prayers and support.  My EKG yesterday (required by my eye surgeon) was fine.  So now the anticipation of someone slicing into my eyes one at a time a few weeks apart.  EEK.

Yeah, I know, have heard all positive feedback about the success, how easy it was and easier than going to the dentist.  But there is still that thought of someone taking a knife to your eye.

With that I'll sign off and bid you all a very happy, SAFE labor day weekend.