October, My Favorite Month of the Year

As far as weather, October is my very favorite month of the year because it doesn't require heat or air conditioning.  Normally it is sunny and mild during the day and crisp at night.  Have often said that I could live with 12 months of October but then there's something to be said for the spring and beginning of new buds.

In a previous Cape May rug camp post I mentioned some of the gals going on a Ghost Tour.  While being invited to take one of the tickets declined to stay back and hook.  Not that I was afraid, just wanted to hook.  Perhaps one day I will go.  More on the things the gals told me about the tour later.

If you have been reading my blog for a while then you have seen photos where I've captured orbs.  In 2014 there were numerous orbs which appeared also an image of a woman (I thought) elevated in the curtain in the bar area.  2015 however, although I would call for the ghost or spirit to join me was only able to capture one orb. Interestingly enough, there was no band or music at the Chalfonte last year.


This year there was music and I went to different floors, down hallways, during daylight and evening as well, trying to get the spirts, angels or ghosts to appear.  Guess what, orbs appeared.  So maybe they like to see people have a good time and enjoy music.


I have never seen a ghost and 2014 thought the image along the side of the curtain was a woman but in checking other photos at night realize it may have been a reflection from the light outside.  Dang!  I wanted so much to see a human image.  To enlarge the photo to see more clear just tap on the photo.  There are more orbs from 2014 all you need to do is type the info in the search engine of my blog. 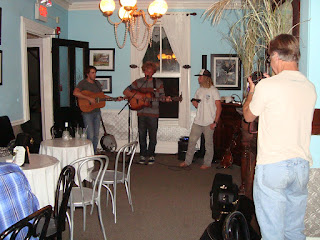 Okay here we go for 2016.... the photo below is obvious and a very dominant orb found in a hallway on the second floor but cannot remember which side of the Chalfonte it was taken.  No I didn't see it while there but only after I checked out the digital photos.  But was definitely calling them to show themselves to me.  Ladies and gents that is no speck of dust on my lens. 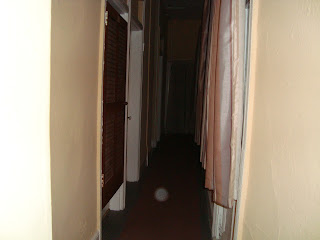 There is an orb on the guitar player's right hand. 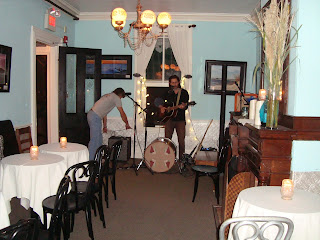 Below there is an orb in the top center of curtain on the wall. 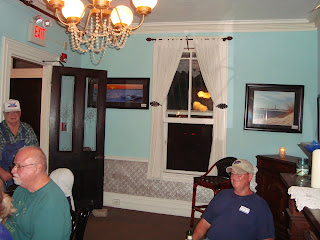 There is an orb to the left of the guitar player in the light colored clothing.  This was the impromptu band who started playing earlier in the evening. 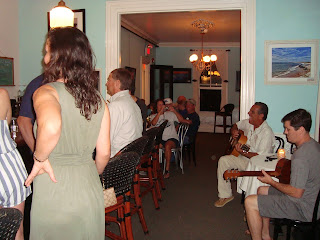 On the wall to the left of the curtain on the left is a faint orb.  I always find orbs in this room, even last year. 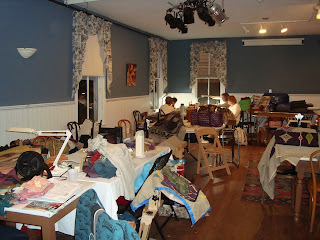 A definite orb at the bottom of the foot of the guitar player in grey.  Is it the same orb but it moved or a different one? 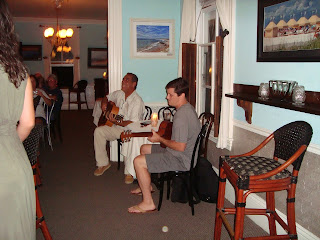 See that brown cabinet in the back?  There is a faint, but large orb in the center. 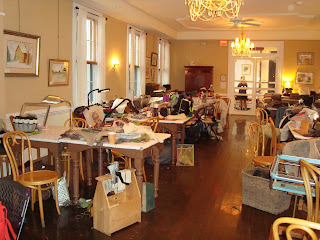 In the photo below there are a couple orbs in the ceiling. 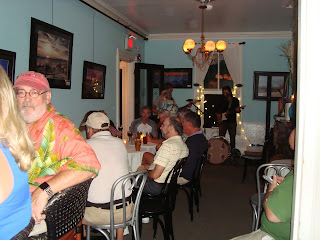 Guess these spirits/ghosts get around in quick time.

Okay, what the gals told me standing in chow line at Cape May about their Ghost Tour.  The tour director told the gals that a couple years ago he took a group to a particular spot (maybe the one they were visiting at the time) everyone walked in and within a few minutes a woman ran out screaming and refused to go back in because she saw an image.

The guide also said that some people commented they could feel the hair of dogs rubbing against their legs as they entered a house.  Am sure there would have been other interesting talk if the chow line hadn't moved so fast.

They also informed me of a book which I purchased in Cape May and immediately read the section on The Chalfonte Hotel. 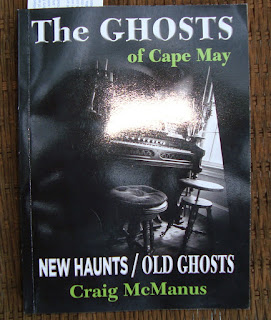 Here is the Table of Contents.  I'm looking forward to reading it all. 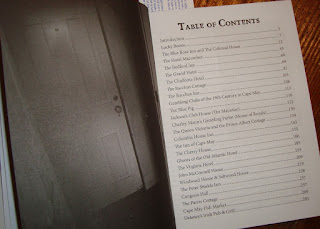 Oh man I'd love to know who those orbs are and wonder if one of them is Theodore?  To learn about Theodore you'd have to get this book by Craig McManus.

Oh, am sure some of you followers recall my speaking about the floral aroma of the hooked pieces purchased at a thrift shop.  Well I believe that orb which is often in a photo upstairs is that lady enjoying my craft and hooking room.

Believe or not, it is okay with me.  But I believe spirits exist and sure hope that the only ones encountered are the good ones.

Email ThisBlogThis!Share to TwitterShare to FacebookShare to Pinterest
Labels: are orbs spirits or angels, Craig McManus, Ghost Tour in Cape May, New Haunts/Old Ghosts, orbs, The Ghosts of Cape May