For me it is celebrating the life of a sister rug hooker, Joyce Kloster, whom I've never met.  But thru a fateful day having my vehicle fixed at an auto repair shop have gotten to know her from her daughter Lea.   To read my previous blog post about Joyce click HERE.
I'll show more rugs further down, but here she is holding a huge Eagle pattern.  Heck, I'd probably still be working on something that large. 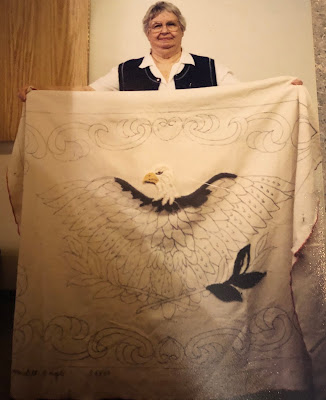 Here is that pattern hooked, these are part of the family photos Lea was kind enough to share with me.  This one might well be the rug Lea spoke of which is in the museum. 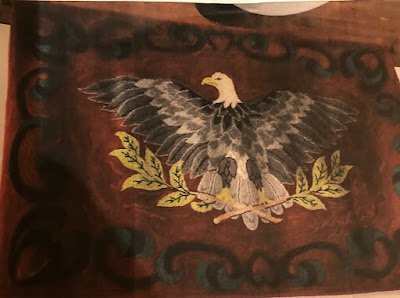 Joyce, was a mother of 6 children with no male figure helping raise them but they had a grandmother to help while Joyce went to college to get a teaching degree.  Lea said she didn't have fancy new clothes or extra anything as a child but she had everything she needed and then some.  She said she never felt like she missed out on anything and Joyce found a way to expose her children to the best possible life enrichment experiences as possible.
She was a volunteer for the Red Cross so taught canoeing, first aid and cpr classes. Lea remembers getting to fix the Annie resuscitation doll's hair, fun for a little girl.  The kids always helped their mom when she was doing demonstrations getting valuable training and nurturing from a loving mom.  The family had a trailer in their backyard with six canoes.  The kids loved getting to flip the canoe over and tread water under it for teaching purposes.

Joyce was also a Girl Scout leader for a few years; when Lea was a teen so took the girls canoeing in the boundary waters of Minnesota.  Lea never knew until she was married and moved away that her mom would pre-write her post cards and give them to the camp director so Lea would have one every day  Joyce also helped with Lea's brother's Boy Scout troop trips.

Joyce also helped the Red Cross disaster team for a few years. There was/is a lot of flooding in Iowa and Lea remembers going around the town of Waverly, Iowa in an ambulance handing out Donuts, sandwiches and coffee.
Here are a few of the rugs hooked by Joyce which Lea owns.  First up was perfect for the Halloween just past and going into November. 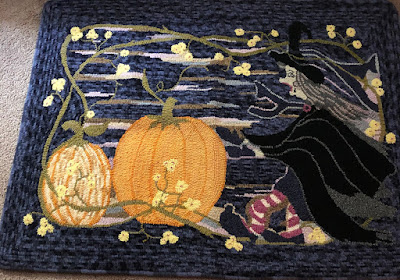 The "Angels on Duty" rug below could well have been designed with Joyce in mind as she surely was an angel on duty caring for her 6 children. 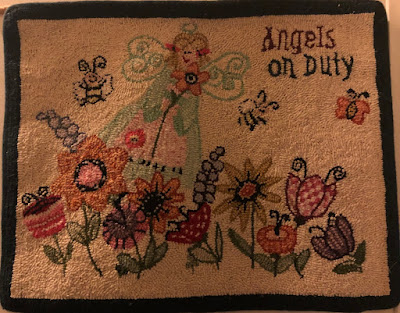 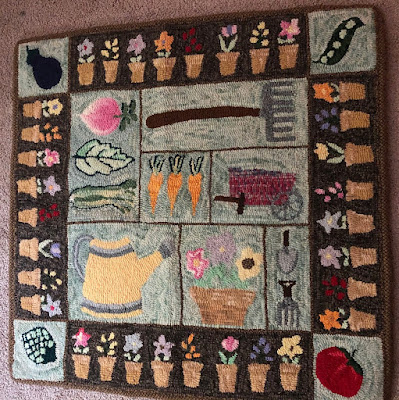 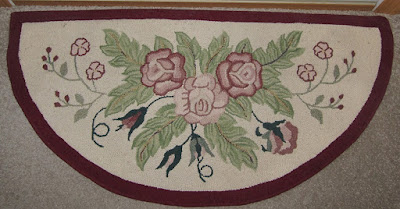 Here is a humorous family story Lea shared with me... As mentioned, there were 6 kids and her mom had a purple cow cookie jar which both Lea and her sister Kathy always wanted.  Joyce said when she died Kathy could have the cow and brother Doug could have the purple rug.  The rug color shows almost black but it is purple. 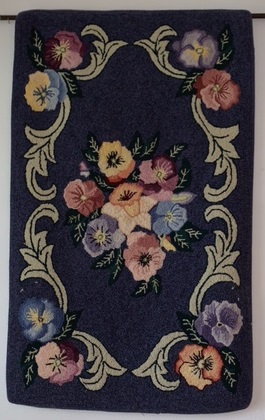 The story continues...as the children became adults, almost every Sunday the family would go to moms house for a couple hours to visit with everyone.  The siblings would sometimes hide the purple rug or the cow cookie jar to see if anyone noticed.  It became a ritual to find where they were hidden.  Sadly they lost sister Kathy to pancreatic cancer about 5 years ago so now Lea has the purple cow cookie jar and brother owns the purple background rug. 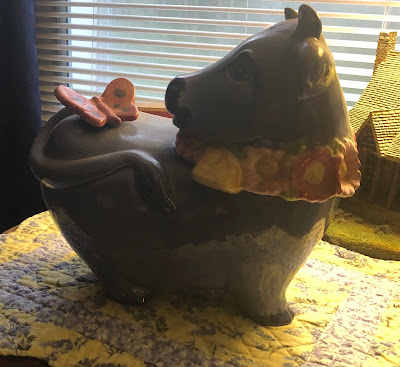 Lea's brother Danny owns these rugs hooked by his mother. 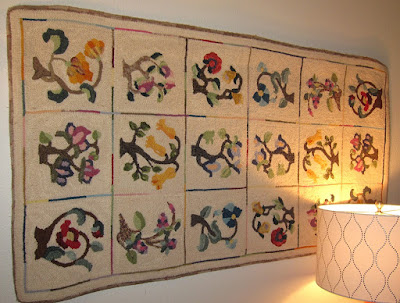 Remember in the previous post (see hyperlink to it above) where I mentioned inheriting a red dot of a dragon and it drawn on a piece of rug warp?  Here is a photo of a completed Dragon Joyce hooked and is owned by Danny, Lea's other brother. 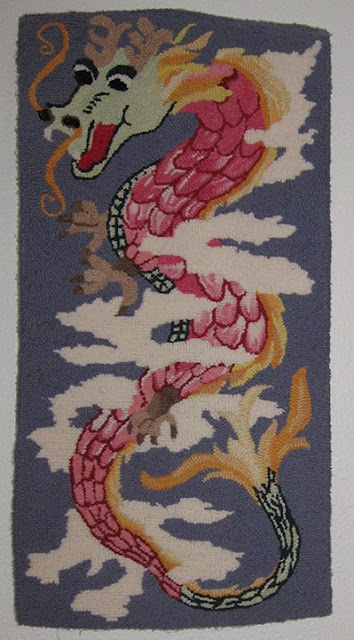 After Joyce got her teaching degree she had time off during the summer so she and the children would take road trips. One summer they drove to Washington state, another summer they travelled to Georgia and the last big trip they drove from Iowa to Bar harbor, Maine.   They then took a ferry to Nova Scotia and drove to New Brunswick then to Michigan and back to Iowa.   They always drove and slept at camp grounds.
Joyce had the trips planned out with AAA maps.  Lea said, "It amazes me now as a adult the things my mom did for us.  One thing my kids and nieces and nephews will tell you I say and I get it from my mom ~ I’m never lost I’m just taking the scenic route lol."
For any of you readers who visited Joyce's home you may have seen these.  Lea said her mother collected Russian Nesting Dolls and at one time thinks she probably had over 1200 of them.  Here are some which Lea now owns but surely not all Joyce once owned. 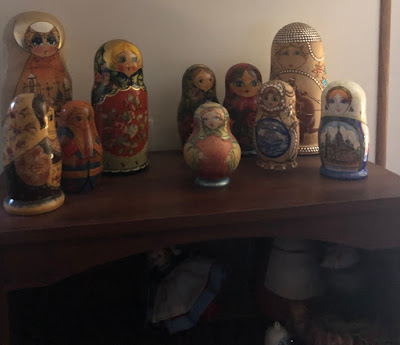 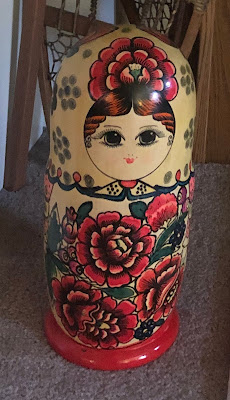 Lea says her mom was awarded a plaque one year (around 1980) and thinks it was a 'kindness to humanity award' but sadly no one knows where it is or who it was from.  She was also Special education teacher at a school called River Hills. The kids helped with special Olympics and there was even a special Ed Girl Scout troop they helped and went to camp with.
Here are some photos Lea scanned for me and she didn't know any of their names.  I saw a photo and thought I knew exactly who it was sitting in the photo with Joyce.  I posted the question of Facebook if the woman on the right was Emma Lou Lais, and immediately had numerous positive "YES's".   For those of you who are not rug hookers, here is some fun facts about that delightful woman EMMA LOU LAIS. 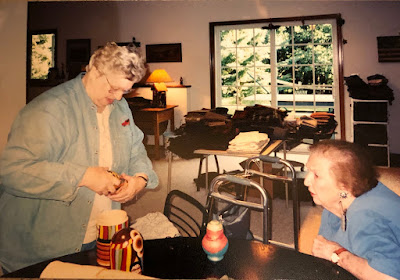 If anyone recognizes people in these other photos please let me know and I'll see about changing the names in the photo. 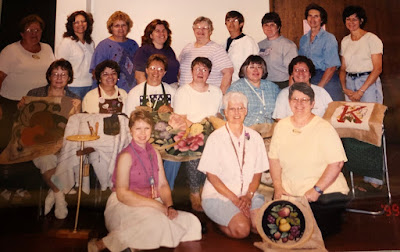 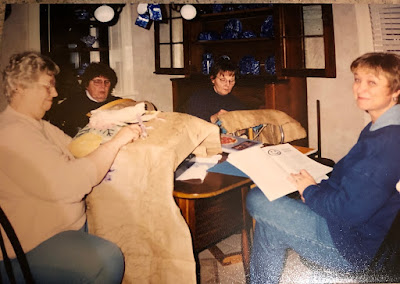 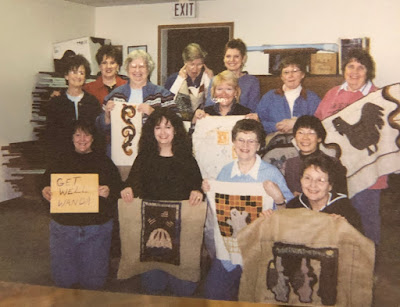 Another thing which Lea wanted to share with all of you is the China Doll on the left.  She said she was allowed to play with the doll when she was little if she was really careful.  Her mom would put a wash cloth between her porcelain feet so they wouldn't chip or break.  The fancy gown she is wearing was made by a friend out of Lea's wedding dress. 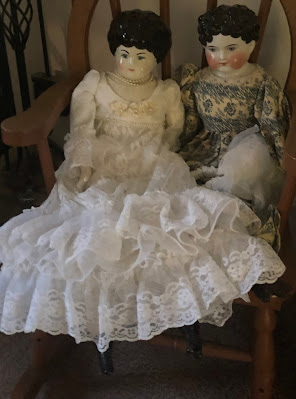 In Lea's sharing her wonderful memories of her mom with me she said, "You never realize how much impact someone you love has on your everyday life until they are gone."
Lea knows I'm doing this post to honor her mother and want to thank her.  What's amazing is that I feel as tho I knew Joyce personally and in reading and again doing this blog have gotten teary eyed.  Thank you Lea, and Joyce if you are reading this in heaven you did one fantastic job raising your children,  thank you for your wool and wool strips, and bet you are an Angel on Duty in heaven now.
Saundra
Posted by Saundra at 3:43 PM