More Cape May Rugs In Progress

I've had numerous classes with Bev Conway and she is always a delight to be around as she is always upbeat, good sense of humor and always seem to learn something in her class.  The new 'thing' with Bev right now is the hidden message hooked in the rugs, which I've spoken about previously and some girls decided to do in Bev's class.  Last year I did put my initials and date in my rug but chose to not do it this year.

This is the rug my dear friend and roomie Deb started in Bev's class.  And I wish you could have seen every one's face, including Bev's when it was Deb's turn to stand up, introduce herself and show the class what she was planning to hook.  You could have heard a pin drop and lots of quizzical faces and wrinkled brows.  Deb said she had this design a few years and decided it would be fun and time to hook because of the hidden message as well as the name of the rug.  The designer of this rug is Susan Feller (thank you Alice), and name of the design is Nurturing Friendships; the image on the left is watering the image to the right.  And, it also reminds me somewhat Picasso-esque. 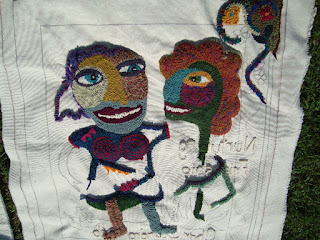 Deb's secret message (which can be read from the back when you flip it over) says, "Nurturing Friendships - Char Saundra Deb - Cape May 2012.  Char and I were humbled that our dear friend would forever record our fun time on the back of her rug.

And here is a picture of people enjoying the rug display.  I wonder what is going on in Rebecca Erb's mind when she is looking at Deb's rug? 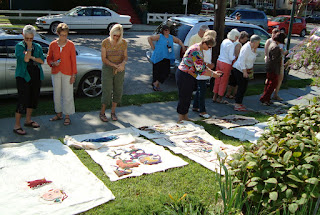 Char and her husband have a mountain cabin in upper state NY near Canada, and I believe the lade they are on is called Silver Lake.  So Char is doing an aerial view of the lake and the few homes which habitat the location.  She concentrated on just the lake for class and will draw in the homes and hook those at her leisure at the cabin or at her other home in PA. 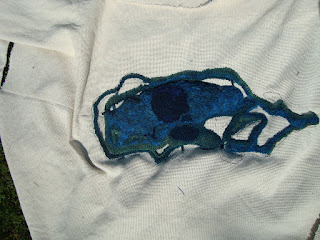 Annie Lee has quite an undertaking as she chose to hook a 5'10" Santa which she plans to put on a dummy board and stand up each Christmas holiday.  I'm sure Santa won't be completely done by this Christmas but she says she is going to have him hiding behind a chair with that part of him which is hooked peeking out behind the chair. 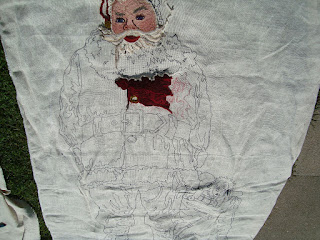 Susan was working on a very complex geometric.  She was thoroughly having a grand time but I'm afraid the complexity of this would drive me crazy, not to mention trying to remember which colors go where.  Bet it will be another beauty produced from her and can't wait to see it next year at Cape May at the show. 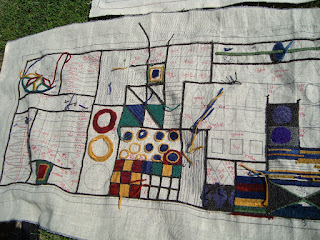 A believe this was a rug that Edie McClure was hooking.  Edie spent a lot of time hooking on the porch and I was in the classroom, but did catch a glimpse of her hooking away and think this was her delightful rug. 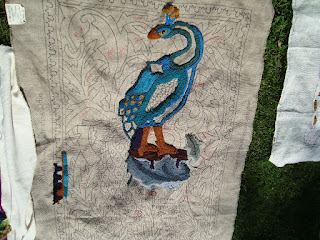 Carol Feeney was in Bev's class but she also spent a lot of time on the porch hooking with friends.  This is a rug designed by her and is supposed to be Sponge Bob's aquatic girlfriend.  Fish really aren't Carol's thing but living in Florida she says that is what sells.  Sorry for the shadow of the light pole is in the way of her ruby red heart-shaped lips. 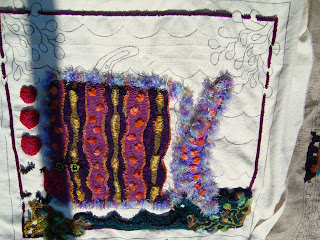 And now my names of people and the rugs they were working on is escaping me so for those of you who I haven't mentioned by name would write me I'll add it to the proper rug photo.  Mermaids were the craze this year at Cape May. 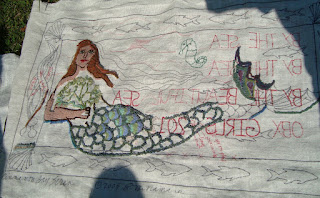 Another Chalfonte rug but changing the border to shells. 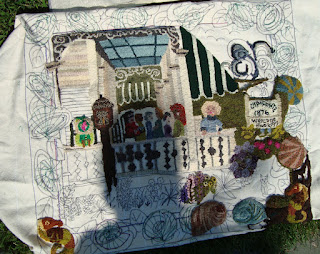 And then there was mine, a design by Vermont Folk Art called Wee Folk.  Like Deb, I've had this pattern a number of years and figured it was finally time to hook it because I'd loved it for years and knew that I wouldn't sell the pattern on e-Bay.  I have not pulled another loop on it since getting home because I've been so busy.  And once again sorry for the shadow. 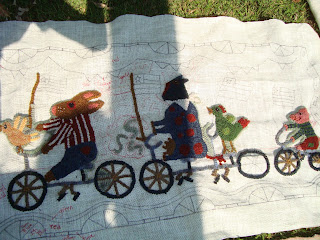 Thanks for stopping by and hope you enjoyed seeing what other people are hooking.