Three doors down is a family who owns a Rottweiler named Phantom.  They purchased him because they were familiar with my long since passed wonderful Rottweilers Shumba (mom) and Panzer (son).  So then Shadow was adopted, a Shepard/Rottie? mix.  The neighbors purchased Phantom who is also a layed back (unless you get aggressive in my face) dog.

Okay, fast forward I now have Ben who is maybe 2 years younger than Phantom and has a high activity level.  The two boys spent some time having a play day and it was funny to watch.  This picture is not an aggressive act, it is only play and chasing.  And, that is Phantom's Mom, not me. 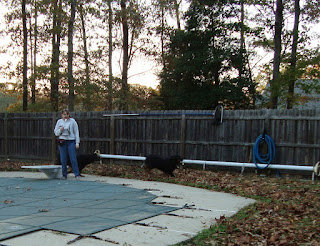 In my neighbor's backyard the pool cover provides quite an entertainment for Phantom as it roars like thunder.  The first time Ben stepped on it he was scared.
HA! Look at these goof balls now. 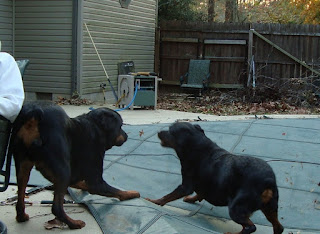 Then after the exercise they wanted to come back for a treats with a command of "SIT".  My boy Ben (Benny Ben) is to the left.  And that sweet Rottie Phantom is to the right.  Both sweet boys who get a bad rap. 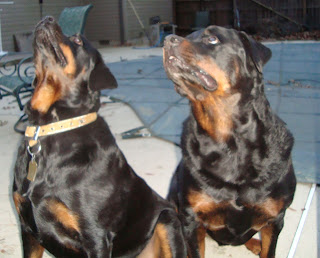 The behaviour of our dogs depends on how they are socialized, bred, trained,  and treated.
Okay, I'm done for the night since leaving for rug camp tomorrow. I'll check back in when I return but know for sure that I've LOTS of patterns to draw once I return home.
Thank you so very much for visiting my humble  blog.
Saundra
Posted by Saundra at 7:23 PM