At least it is SHEEP show time.  Part of the flowers were toyed with but color to still be determined for the final hooking.  The house colors haven't even been pulled or decided yet.

Here is my sheep in progress.  I wanted so much for the lumpy natural sheep look so was hoping the wool chosen for this project would work. 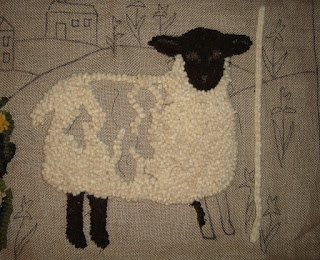 The wool used for the sheep I've had for years.  It was something  Gail Dufresne  was selling at a rug camp and thought immediately of a sheep.  I believe I've had this wool for at least 9 years and happy to finally use it for a sheep. 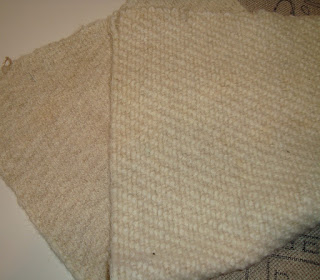 This wool would rip at wide widths but I hand cut every two rows over.  And THEN, if I needed a thinner strip would cut that piece in half. 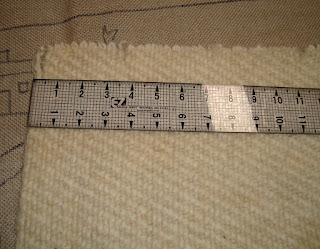 Here is a close up of the sheep and the hand cut strips used for the majority of the sheep. 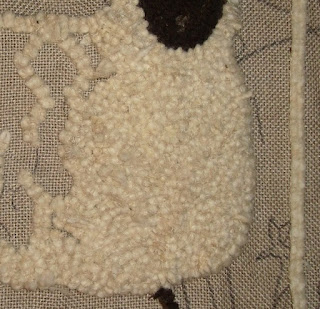 Was so hoping to leave some length to the strips so it would appear as a shaggy sheep but the ends wanted to stick out straight like a sore thumb rather than hanging downward.  For now will leave those few ends and see if that provides the look.  If not then I'll trim them down like we do most ends.

If anyone would like to join in the Facebook Out of Hand Rug Hookers Challenge click on the link and ask to be part of the event.
Posted by Saundra at 9:19 AM