I'll start with pieces hooked by Eric ~ Below is a design named Rick Rack and is for sale $1,700.  It was stunning looking at it up close.  I drew and hooked a rug similar, tho not this creative.  The shape is in at least one rug book on my shelf. 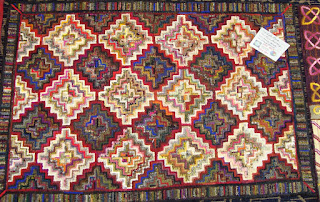 Eric, using the same concept but applying the design in a different way he did this smallish mat.  You can see the design in the four blocks, yet look at the artistic way he hooked the border and outlines of the blocks.  His mind is so creative. 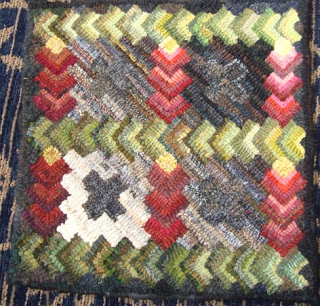 Below is a huge rug hooked by Capri Boyle Jones which could be yours for $6,865. 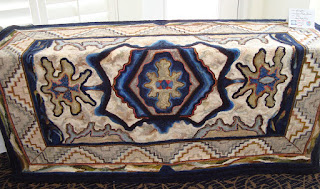 Another rug hooked by Eric is called Duncan and a Pearl McGowan design.  IF..IF I heard the conversation correctly, Pearl was asked to hook a 'log cabin' rug and this was her concept.  It is thought the circles in the middle was the chimney.  Remember, Pearl was NOT a primitive hooker. 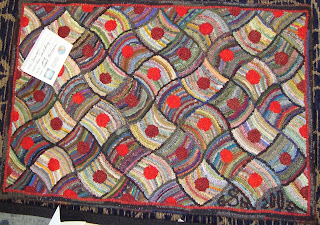 Below, the edge of the rug and hit and miss scallop is gorgeous.  This was also hooked by Eric and he commented that primitive hookers love the edge but taken back by the orange and purple. 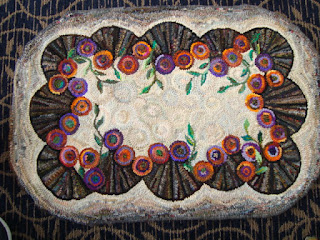 Pat McDonnell hooked the rug below.  The design is called Gettysburg and was a pattern offered by Marion Hamm. 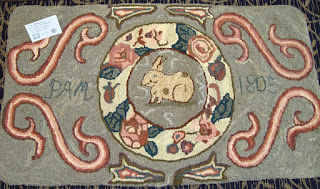 Dorset Flowers, below, hooked by Ingrid Heironimus is a design by Lucille Festa.  After seeing this rug hooked by Ingrid am now confident she could handle me in her class if I was hooking a primitive design.  Love her 'tile' squares for the background. 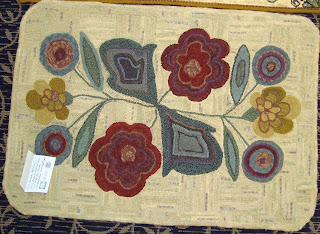 OMG, you should have seen this huge runner named Prudence, yet another Pearl McGowan design.  Eric said he had hooked about a third of the rug, found himself needing money.  So rather than finishing the project he sold it to Kathy Moyers who finished it.  You cannot tell where Eric's hooking stopped and hers began.  Awesome!

Here is the label on the back to document the story.  Eric asked if he could borrow it for his "Encore" to teaching this class.  And what a hell of a wonderful class it was Eric. 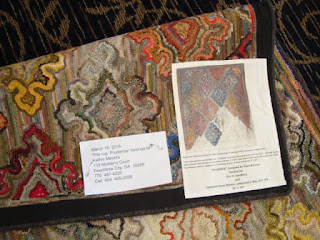 Pam Johnson hooked the proddy sheep design below from Heavens to Betsy. 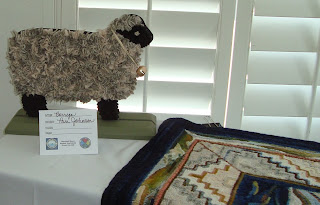 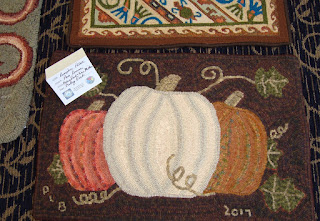 There are more finished rugs in the show but since I hadn't gotten permission to post the photos didn't want to get in a battle with anyone.

There are some in-progress photos from camp yet to come.  And then I'll show you mine.  Happy Tuesday.

Feeling so guilty and such a slug.  I have a rug pattern to design, still have laundry to do, yet enjoying the ambiance of slowly hooking on the camp rug.  Well, that is between doing yard work, grocery shopping and mom car pool for my neighbor's 3 kids.  I'm 76 and thought those car pool duties were over years ago.