Am finally labeling rugs and a couple were hooked during 2021.  Per Lauren's (Rugs and Pugs) suggestion I used a light weight iron on fusible interfacing/stabilizer to the back of the labels.  Don't know why I hadn't thought of that previously because I had some from my clothing and craft project days.  Sure does make the labels easier to stitch ~ thanks Lauren.  Also Lauren suggested I put photos of the original antiques on the labels again, which I did. 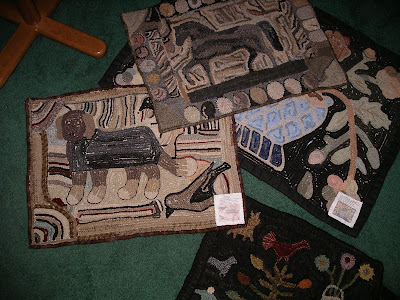 After pulling thorny vines I felt like getting out the dye pots but without the mess of mixing up dye.  Thought I'd look in the tray to see what was already mixed and use it up.
There was a bright plaid I've never used and don't know why I purchased it.  Knowing I already had a small jar of dye previously used to 'tone down' wool plucked it from the tray.  The subjects and results below were lackluster.  Since the dye was old it may have lost its potency.  The left side was the wool in the pot and very little change. 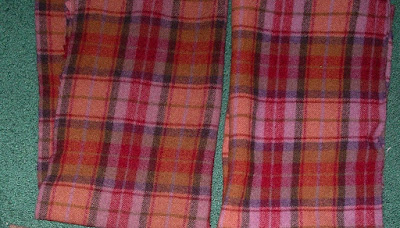 However, after the wool was soaking in a pot of soapy water and even after simmering on the stove with dye, the water had pink color from bleeding out of the bright wool.  I didn't want to pour in white vinegar and the wool re-absorb some of it's pink color back.  So decided to pour that water into another pot on a piece of lavender repurposed skirt.  I do like these results on the right and at least the entire day wasn't a bust. 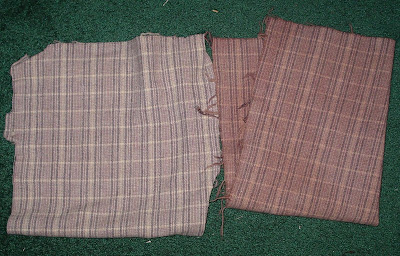 In another pot I used some of that same original old dye on the large blocks of pastel.  Again there's very little difference but you can see the left side is what was overdyed with the spots of mottled color. 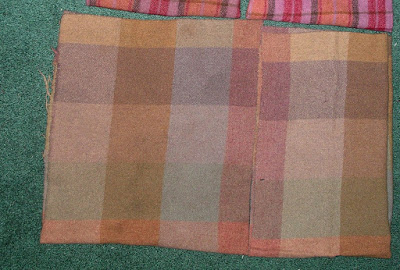 Appears in order to get better results I'll need to mix up fresh dye.  I'm still unhappy with bright plaid but will try another 'tone down' dye challenge in the future.  But today I'm so over it.
Still undecided what my next project.  Will trace out a couple antique adaptations posted previously.  Maybe by the time I've traced them out I'll have come to a conclusion on what my next project will be.  Meanwhile am still plugging along pulling loops on Mother's background (curtain) while avoiding the fishbowl.  Perhaps when the background is done the fishbowl will appear to be less an issue with me.
Saundra
www.woodlandjunctionprimitives.weebly.com
Posted by Saundra at 10:21 AM