With Project #1 hooked (the seasonal swap) it was time to work on the second in priority on my list of things to do to meet deadlines.  I still have the swap mat to steam and tack backing down but I'm still ahead of schedule.   This Sincerely Jane Challenge rug isn't really due until March so am doing okay time-wise on this one too, I just want it done.

So now I have to come up with colors for the last remaining triangles.  I'm trying not to use a color which would be close in proximity to the same color hooked in a square but must say it is getting more difficult now because the colors repeat themselves in either the blocks or the border triangles.  Therefore the wool strips used just might be a row or couple blocks distance anyway.

And just this afternoon was asked to assemble a hooked eyeglass case for someone.  I have assembled purses before but this is a few inches smaller than the purses.  Therefore, since that is relatively small piece thought I'd better hook one and assemble mine before experimenting on someone else's work and take a chance on ruining theirs.  I'd much rather ruin something that I'd hooked than theirs.  So later today or tomorrow I'll draw out a design and then start hooking the glass case.  Since it is rather small am hoping to have a great way to assemble for when the Priority package arrives on Monday or Tuesday. 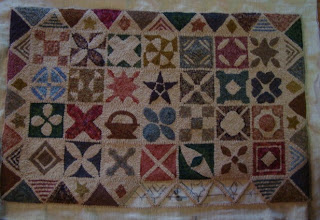 So the SJ rug is getting close and then I'll have all that yucky binding to do.  I'd much rather hook than bind rugs but wouldn't pay someone to do it for me so will have to suck it up and do it myself.
Posted by Saundra at 2:57 PM