That was a very productive year hooking 14 pieces; but then several were small mats.  Hannah's Hen is the first on the list.  It is a design by Woolley Fox.  Shown below on my antique school master's desk. 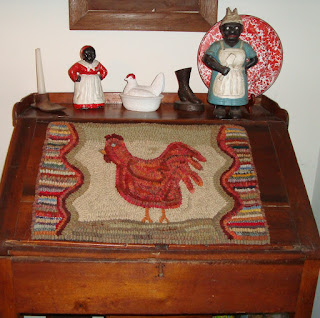 Antique adaptation of a Magdalena design is known as Harvey's Magdalena which hangs on a wall in this room. 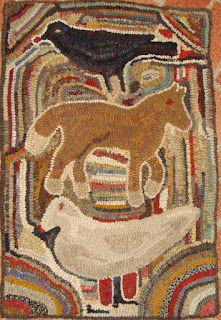 A crow design by Heavens to Betsy I made into a pillow. 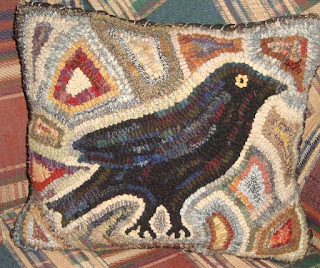 Right after finishing the pillow decided it might be fun to have another crow pillow so designed a Magdalena inspired crow which ended up hanging in my kitchen instead. 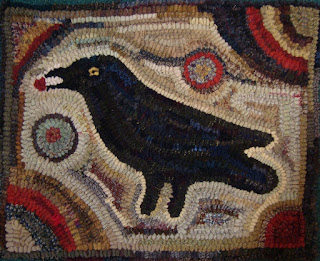 An antique cat rug inspired this small piece ~ the edge is finished with the Betsy Reed technique. 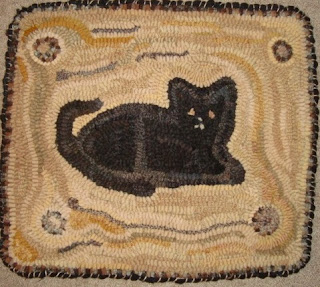 The rug below is an antique adaptation and was color planned by Barb Carroll.  And yes, the antique rug showed the dog having claw like toes.  I didn't know whether to hook the dog with regular paws or toes.  Barb suggested I hook it like the antique. 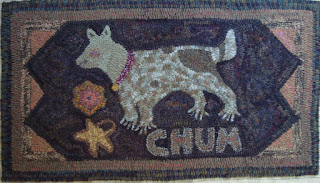 Another antique adaptation which I LOVE is one I named Cherries and Candy Stripes.  It has my favorite blotchy background.

Mr. Cotton Tail is a design by Brenda Gervais. 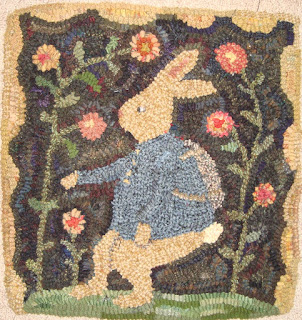 The rug below was an Out of Hand Rug Hookers challenge which I named Puppy Love. 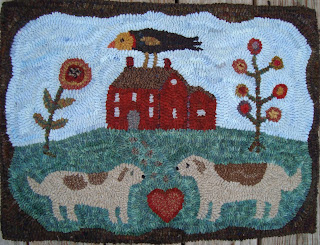 That year I finally decided to hook a pattern from my stash ~ actually it was a kit purchased years prior from Tonya Robey who once owned Mad Hen.  The first photo is with a flash. 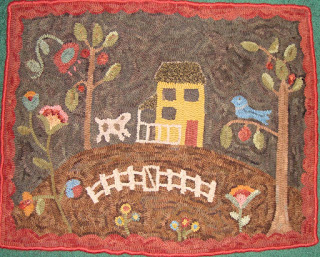 What a difference.... the photo below is without a flash now taken on my back porch.  One shows an orangy red and the one below a blue red.  Neither red is how it actually looks in person. 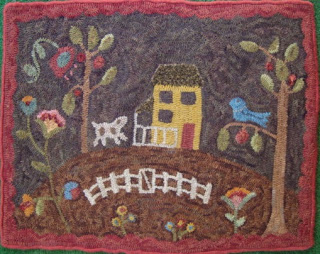 That year I did 3 fall/Halloween themed pieces.  First was Hester, a design by Lori Brechlin which was a pattern offered in Primitive Quilts and Projects. 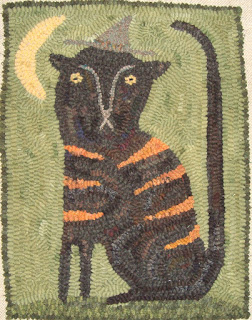 Also Hobo Joe, a design by Lucille Festa.  She showed her sample as a cut out but I chose to hook a mat for the table.  You can see I used the same green over-dyed wool for both. 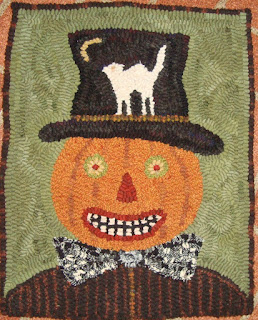 And at a Cape May rug camp with Kris Miller, I hooked this wonderful pattern by Lori Brechlin called Nantucket Broom Ride.  We three gals did a good collective job, didn't we Kris and Lori?

Actually, there was one more contributor to the success of this beauty.  That was my dear friend Barb Carroll who came to my rescue when I had a cellulitis bacterial infection.   Sweet Barb sent a few purple choices, red for hair and green for the flowing scarf.  Yup, that did it!  Thanks for the 'get well' package dear friend. 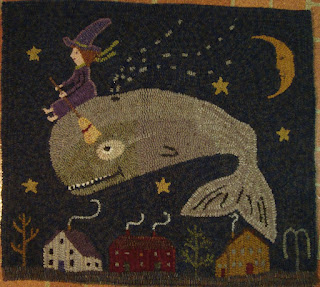 And last but not least, this was the year I designed a rug for my son's addition to his home.....his "Man Cave" rug. 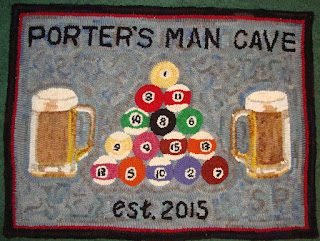 Happy humid Sunday folks.  But at least it isn't raining.

Yesterday I mentioned to someone I was going to cut grass before the humidity set in today.  She wrote back asking if the water had subsided enough to cut the grass.  The first photo inside the fenced yard shows still a puddle of water but surrounding that is mucky mud. 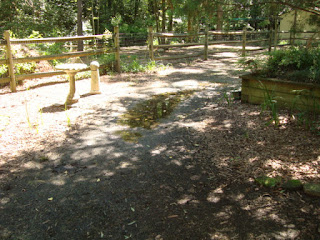 It is hard to see, but just beyond the fence the water has receded but beyond those trees and my clothes line is full of water and tons of mosquitoes. 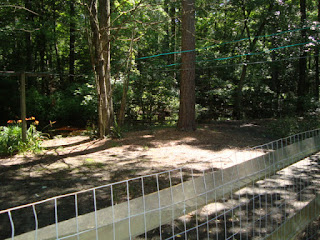 In the picture below you can more easily see the water and the shine into the woods of the sunlight's reflection on the water. 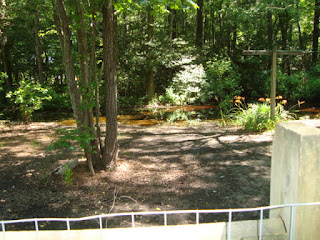 Was able to walk in this area just beyond my garage side without getting my feet wet, but to show the water level I opened up the in-ground propane tank and you can see water.  There are leaves floating around in there but was afraid to stick my hand in to remove them for fear of damaging a wire, gear, etc. 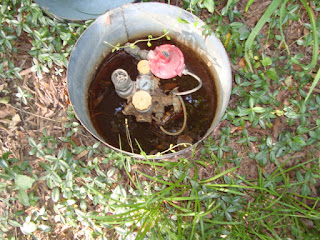 So yeah, still have lots of water here unfortunately.