I switched out a rug from the computer room to my bedroom.  This is Shadow's Memorial which previously hung to the left of me as I face the computer. 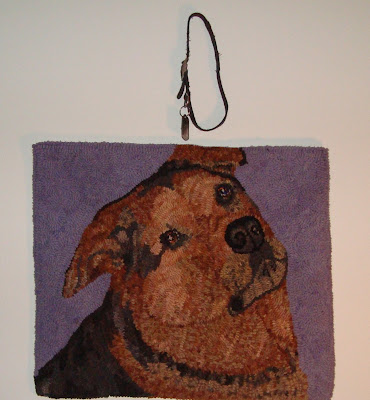 Now she is in the bedroom along with the memorials of my other beloved pets.  Her collar is placed closer to her as are her ashes.  Each time I walk past her ashes I'm reminded to get a piece of that matching wool and hook a top for the ash box to make it less offensive to my eyes.  I love having her ashes but the crematory name triggers a memory of her passing.

I had a great teacher for Shadow's piece at camp but it was stressful for me to hook in a class setting.  Only regret is following her suggestion for this periwinkle color background; wish I'd used the soft green as in the Shumba and Panzer Memorial as well as Ben.  At least it would have been a better companion to the rug I placed her against which is actually similar in color to the other memorial rugs. 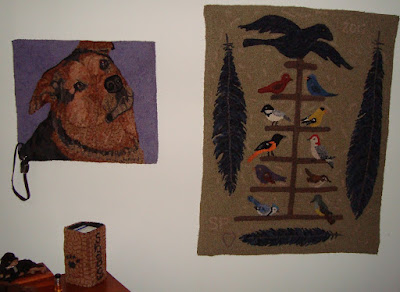 Most of you have seen these over and over but I do have a couple new followers and maybe they haven't.  Here is the Shadow and Panzer Memorial; they were hooked with #3 strips and the background with #5 or #6 cut cant remember which. 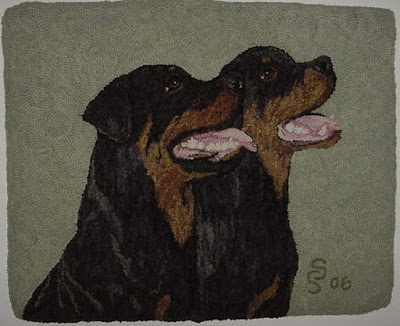 And here is Ben hooked at home without a teacher and hooked in #8 except for a few thin strips for detail ~ and yes I used the same background wool it just looks washed out as the photo was taken with a different camera. 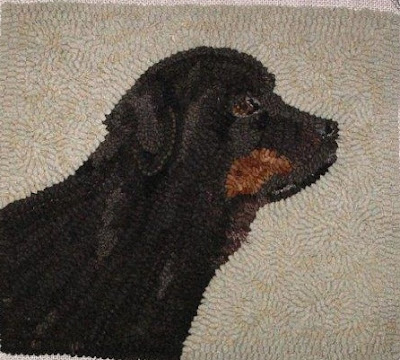 In the same room I also hung a pattern by Nola Heidbreder named Golden in the Garden but I changed the dog to look like a Rottie named Ben.  Did a bad drawing job on Ben's profile but made up for it when drawing the real Memorial above.  This was never intended to be his memorial rug so the above piece was hooked after. 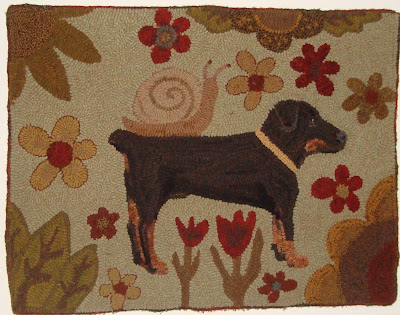 Another view of the two on adjacent walls.  So now you can see this picture of Ben's profile is the same green as Shumba and Panzer.  The jointed fur bear I made for my mother from her mother's (my grandmother) mink coat and it has a Coast Guard charm as both grandparents were in the Coast Guard.  I inherited it after mother passed.

Remember last week when I filled my car up with gas and I paid $3.17 per gallon and that's the cheapest in town.  When I went to the grocery store during the weekend it was $3.27 so went up another 10 cents in just a few days.  Thanks to Joe Biden for shutting down the pipeline.
That's it for me tonight and I feel like a slug with nothing much accomplished, not much even on my horse rug.  Yesterday a lot got done in the yard and even made a big bowl of vegetable soup.   Matter of fact when I go outside and come back in it still smells like vegetable soup in the house.  So won't even be cooking tonight, just scoop out a bowl full of vegetable healthy goodness.
Saundra
www.woodlandjunctionprimitives.weebly.com
Posted by Saundra at 6:54 PM