Having Fun and Hooking Letters

It is such fun to hook something that is fun and no stress.  No, my Long Island Farm isn't completely bound yet and Shadow hasn't been steamed yet.  I just needed to play and have fun working on the Antique Hearts and Swags design started with Betsy in November.  No, don't have a picture to share of that just yet but will do that tomorrow.

For the newbies I already talked about cutters and still owe an episode about frames but that would require a lot of work and already it is after 5 p.m.  However, there is another topic someone has asked me to cover and that is about hooking letters.

No I'm not an expert and normally don't follow the rules anyway.  Usually I just hook my letters in the same size wool strips that I'm using for the rest of the rug.  After the letters are hooked then I do a row of background around the letters to secure them in place.  Once hooked in don't normally pull them out and hook using a different size.    Here is the Crow Sampler by Ali Strebel that I hooked and the letters are in #8.  I did take some creative licence by carrying the circle border all the way around. 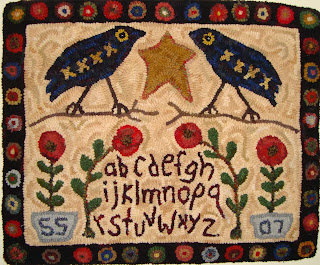 Another rug I hooked with letters is Stop and Smell the Roses by Karen Kahle, again hooked in #8.  I really need to tone down that white rabbit on the right and say that every time I post a picture somewhere. 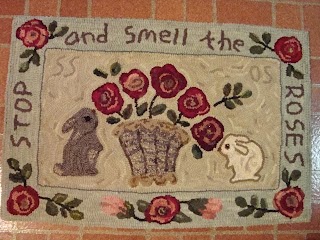 I've heard or read where some hookers will use a thinner wool strip to hook the letters, then hook around those letters with background.  After which they pull out the letters and hook in the designated color using a slightly wider strip.  Hey, I don't care much for ripping out already hooked loops despite what I previously did with my poor Shadow memorial.

My girlfriend Shari hooked this antique adaptation and took the lettering to another level by outlining her letters with yet another color other than background. 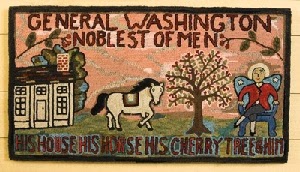 Shari hooked the letters in a red #8.5 wool strips and then outlined them in a #6 wool strip.  UH, I don't think I'd want to do that......once is enough already.  But Shari made quite a great statement in her rug and the words don't get lost.

Letters?  Hey, you can hook a flower stem, right?  That is nothing more than hooking on the line (or inside the lines) whether it be on the straight of grain or an angle.  So if you can hook a flower stem you can hook a letter.  Unless you're doing something special, all you have to do is hook the letters at the same height as you are the rest of your piece.
Have a great evening everyone.  And again, please be kind to one another.  Today at the grocery store I had two items and was in a rather long line where the people in front of me had half or full carts full.  It is a small store so at this time only one register was open.  The gentleman in front of me told me to go ahead of him.  I thanked him and said that chivalry isn't dead, and that his momma would be pleased at the great job she did in raising him.
Saundra
﻿
Posted by Saundra at 5:48 PM