A loyal reader asked me about hit and miss borders (thank you Kim), I was going to just send these pictures to her but realized other readers might like to read this information too.  Not that I'm any expert, but to show you what I've done in the past with those pesky hit and miss borders.

This was the very first hit and miss border done on my very first rug camp rug after learning to hook.  It is a Charco design called Heritage.  On this one I used short strips of all of the colors inside the design. 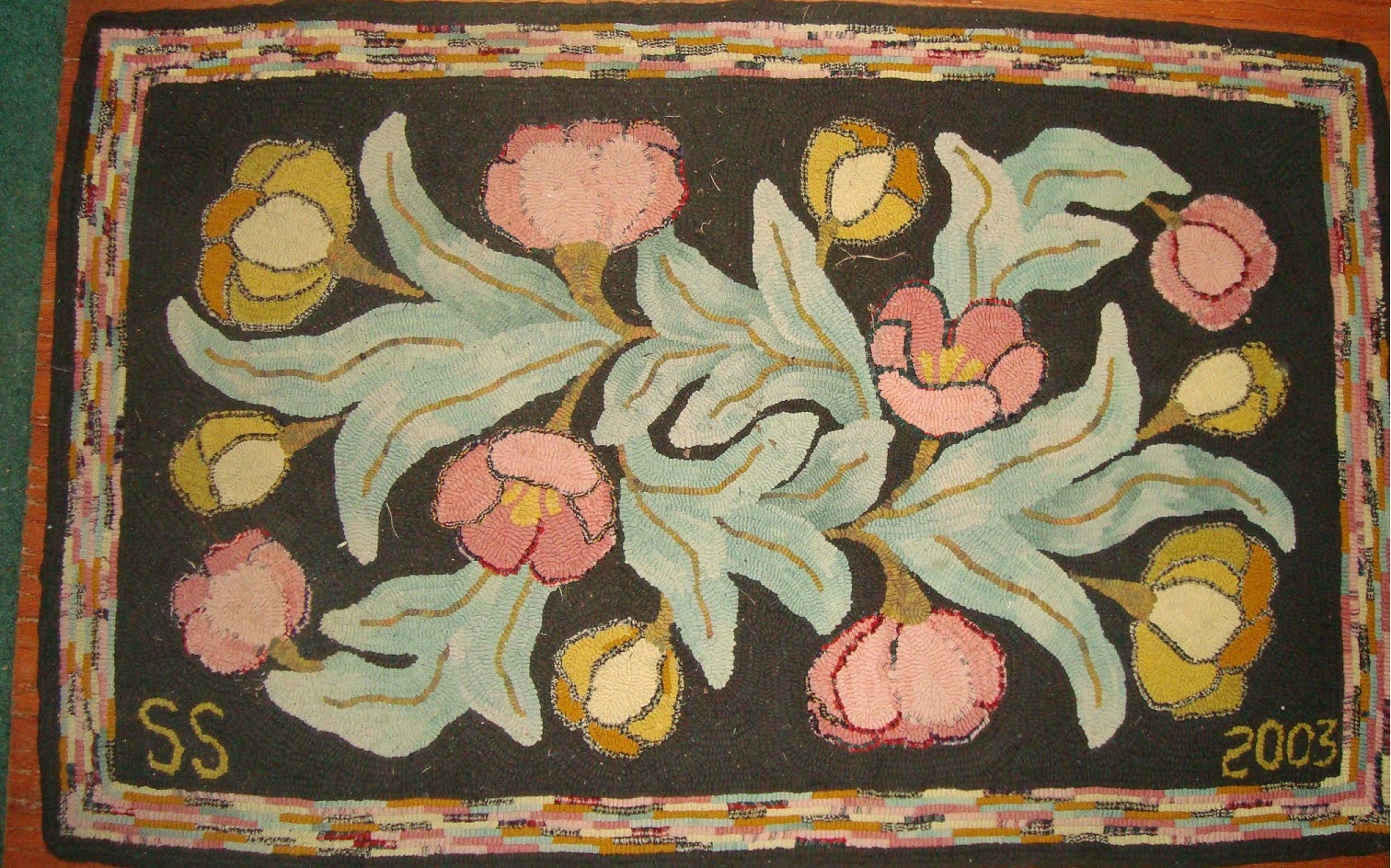 This may have been my second hit and miss border and think it works well even tho the entire rug is somewhat busy.  It is a Bev Conway design called Speckled Hens. 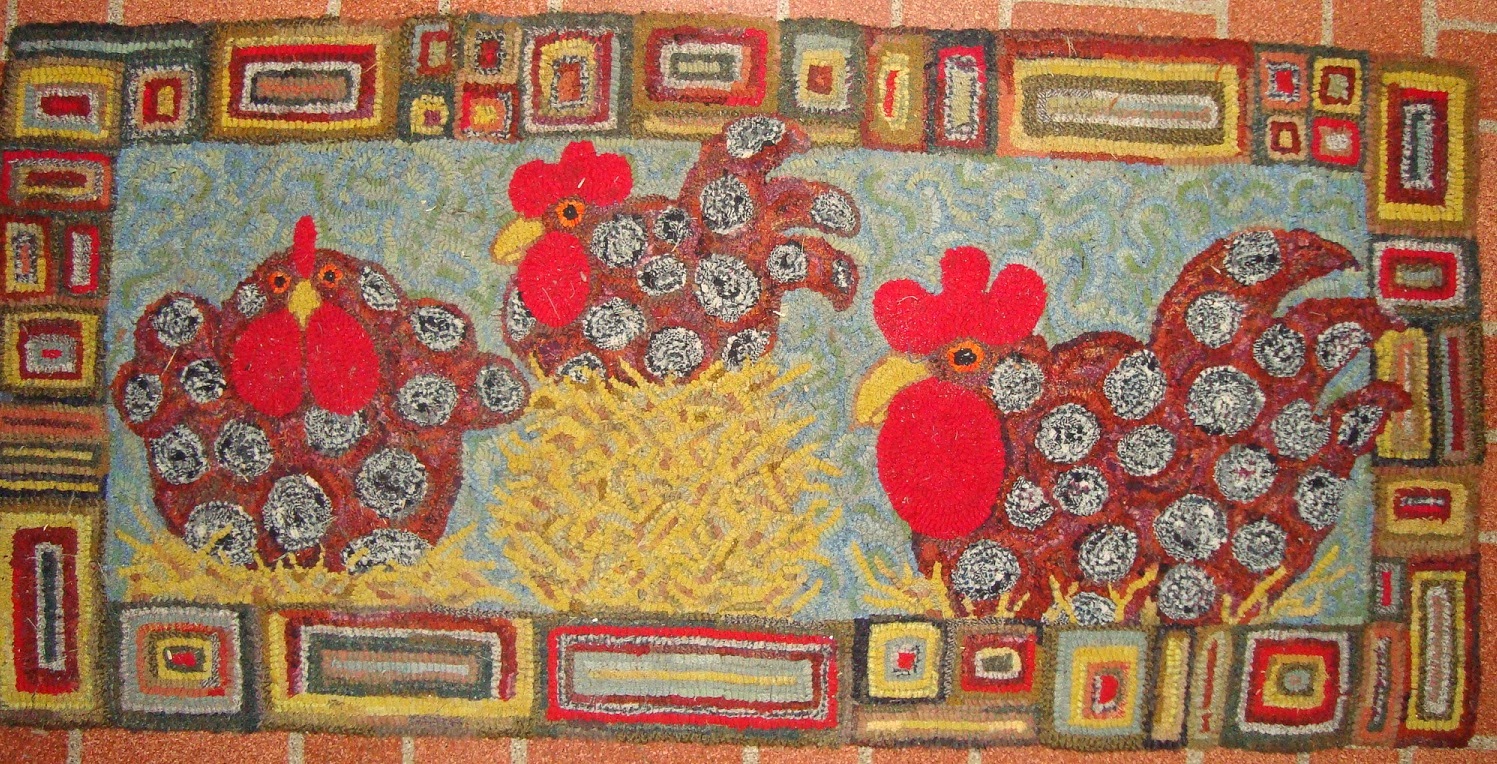 Below has some blocks with hit and miss and other blocks filled in with a solid color.  That is a great way to do a hit and miss border if you'd like a little variety.  This was a free pattern insert in a former Rug Hooking Magazine named Jack and designed by Barb Carroll. 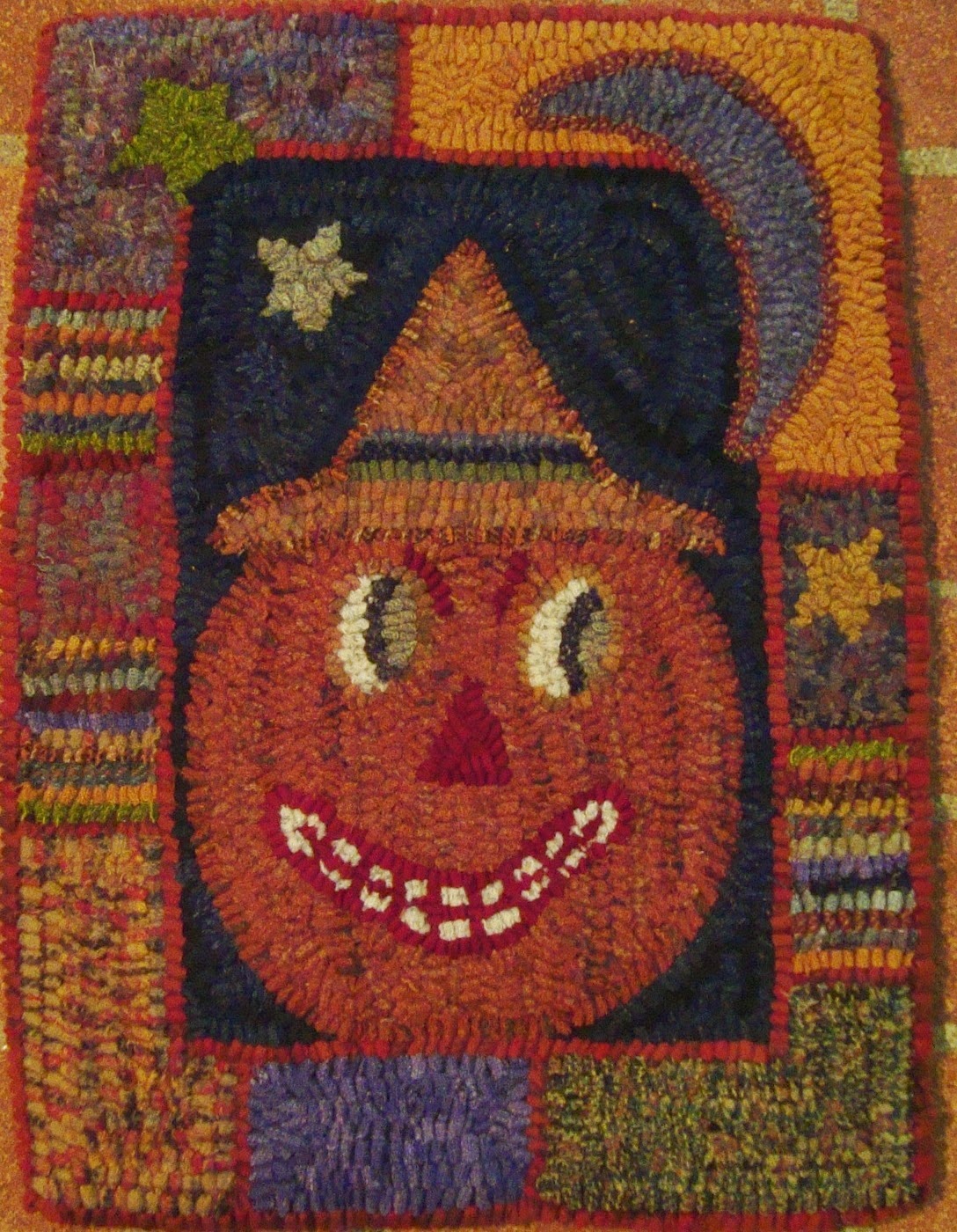 Another design by Woolley Fox named Henny Penny has the hit and miss just at the ends as you can see. 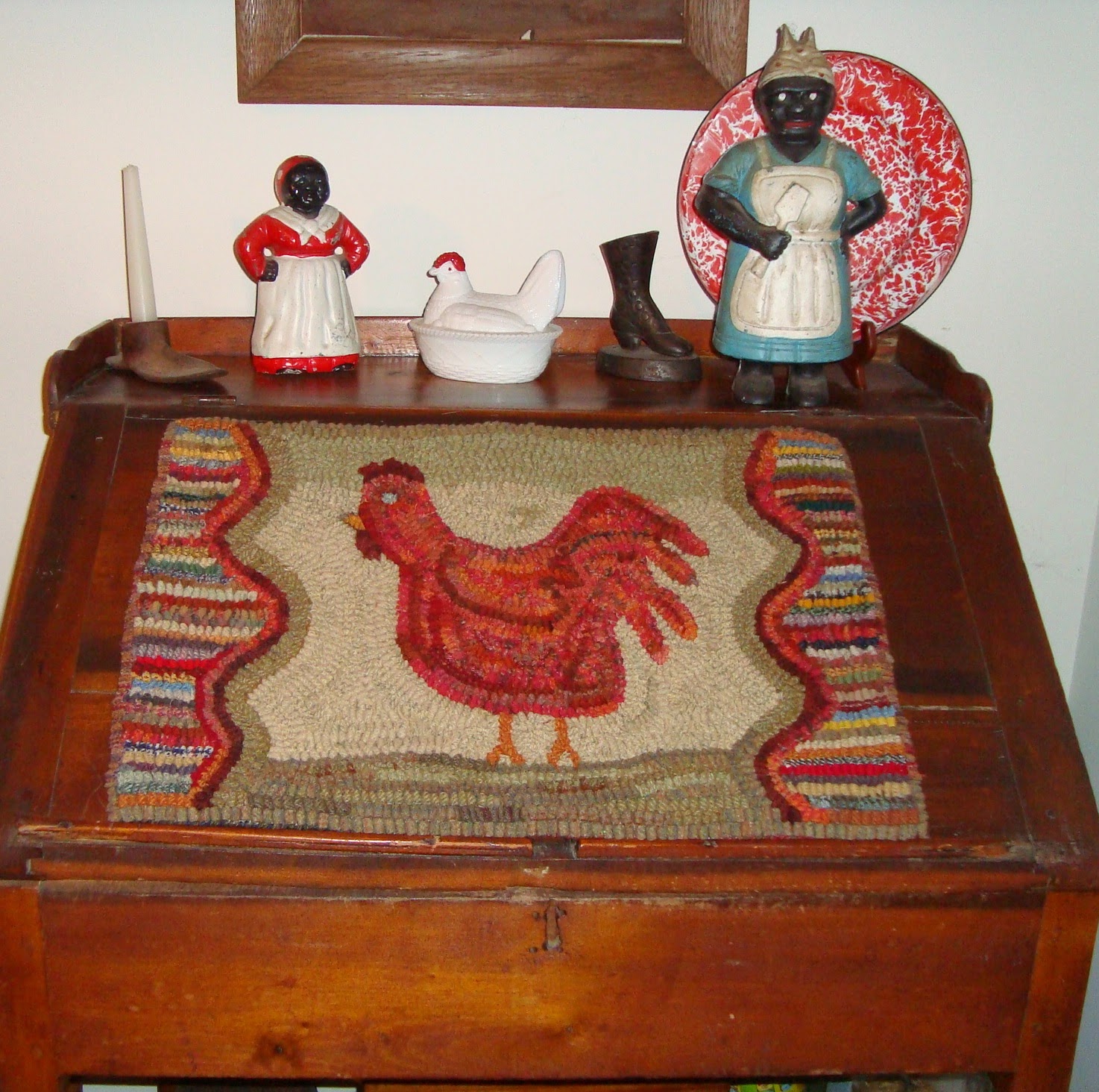 Another hit and miss border has a couple rows hooked of the same color side by side instead of just one hooked row of a color.  Two Chicks is a design by Polly Minick. 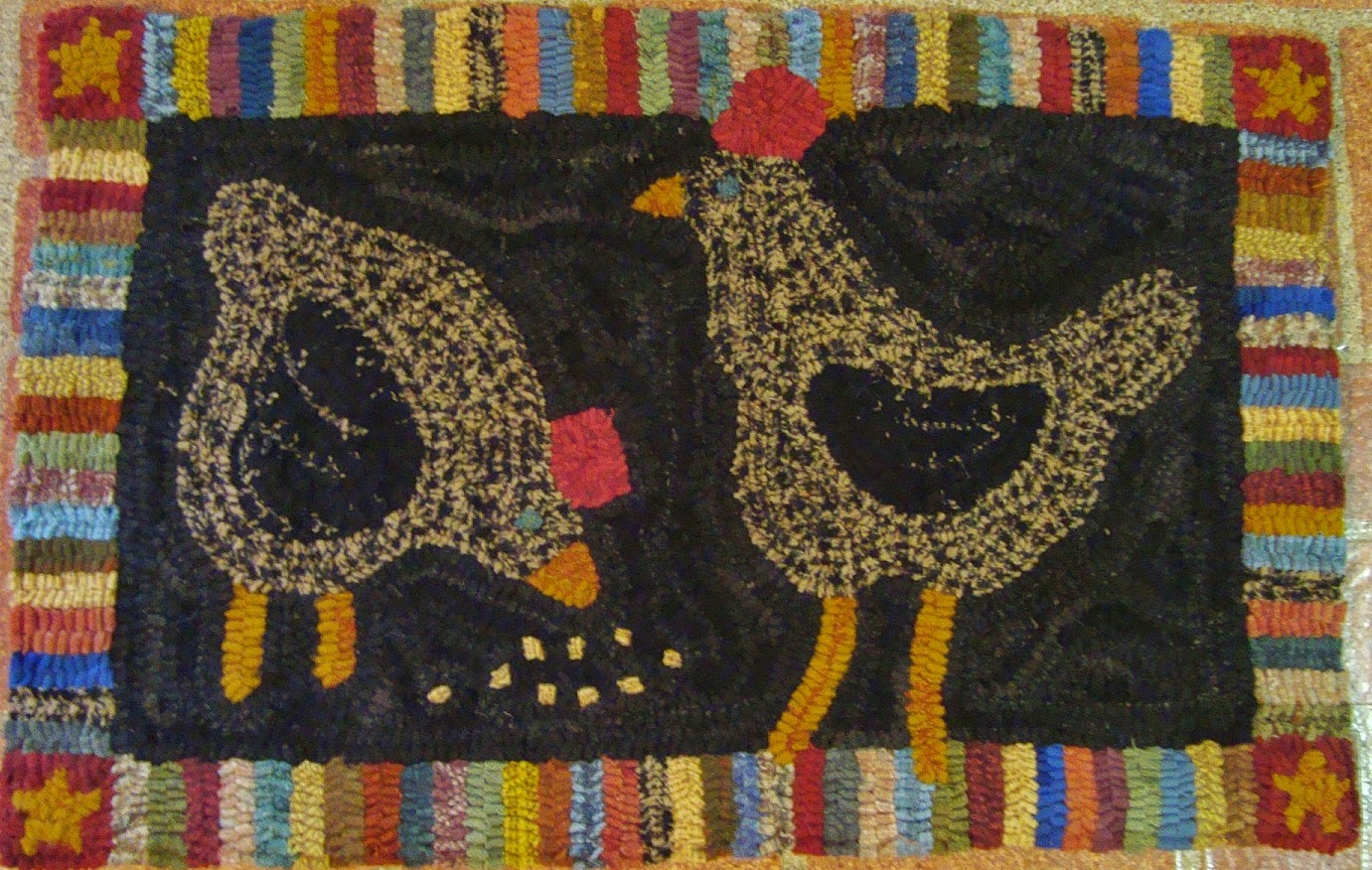 Below is an adaptation of an antique I hooked and sold.  This one I've considered hooking again and would do those gorgeous roosters as close to this as possible but would probably do other border and background differently.  Don't think I'd make the background blotchy but a little more subtle. 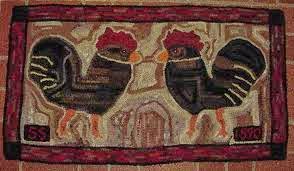 This also has a hit and miss but using textures.  The rug is washed out since the picture was taken with a flash.  It is a design by, guess who..... Woolley Fox called Woodland Deer. 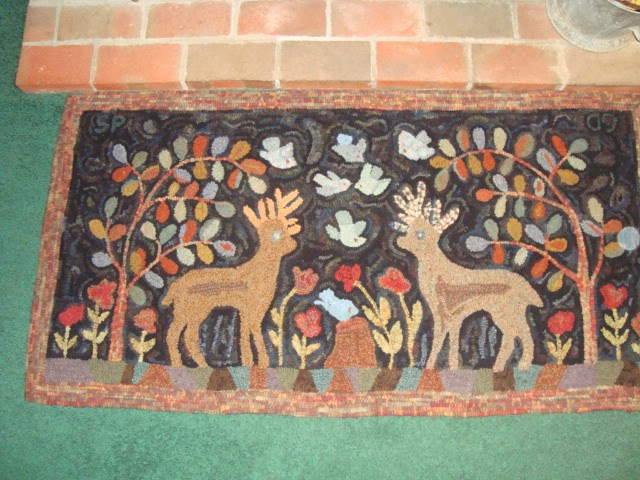 And finally, the circle mat I hooked which, again has the hit and miss using textures.  BTW, this was a great mat to hook which used up a LOT of worms from my baggies.

Hope some of these may help when you contemplate doing some sort of a hit and miss border.  Have a fantastic week.

Saundra
Posted by Saundra at 9:42 AM