Here are more rugs for your viewing pleasure.  Sybil placed her rugs in the show and were posted yesterday in the "Teacher Feature" post so won't show her rugs here now.  I know the names of some hookers of the following rugs and will mention the name.  IF, by chance one of my followers knows the name of a hooker not mentioned, please email me and will give credit.

OH!   Since you guys have seen all my rugs in progress over the last year I didn't show my rugs which were in the show on this blog post either. 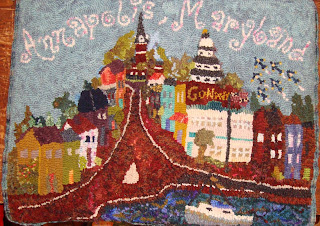 Sadly I don't know who hooked the above Annapolis, Maryland rug but it is really neat.  "Go Navy" is spelled out with the Blue Angels flying overhead. Really cool rug. 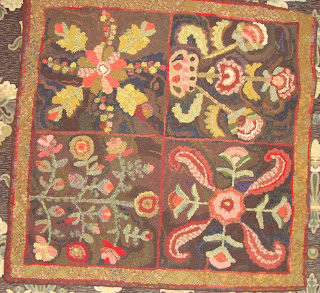 The four floral blocks are nice and reminds me of an antique quilt I've seen with lots of little detailed blocks. 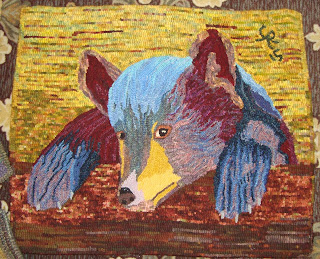 Baby Blue Bear above was hooked by Cheri Reid. 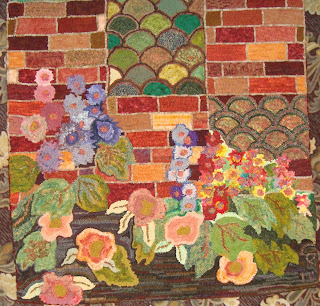 The brick wall and floral rug was also hooked by Cheri. 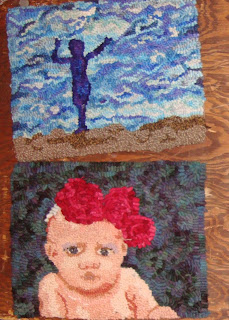 Unfortunately I don't know who hooked the two children pieces above; the infant's face is adorable. 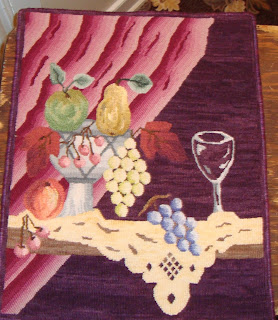 The above curtain and wine glass rug isn't the one shown yesterday by Sybil, this is someone else's work and don't know who. 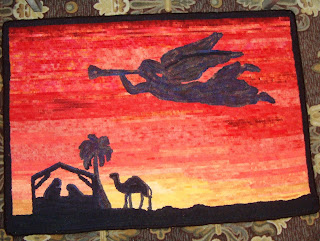 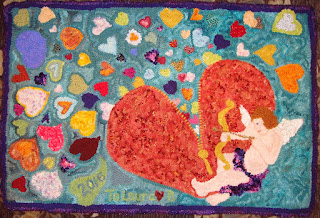 Wow, seems there are a lot of rugs without a name; don't know who hooked Cupid, but know the hearts were meant for Laura as that is hooked in the rug. 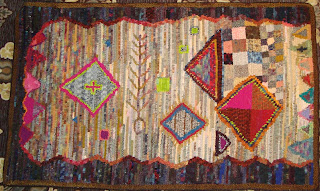 Ahhh, I know who hooked the primitive geo faux woven tapestry above. That was hooked by Lynne Fowler at Cape May this past September.  My favorite piece out of the class. 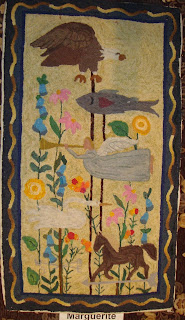 Would you believe it if I told you the rug above was hooked by Marguerite Hastings who is now 101 years old?  All that is needed is the whipped edge and bet she will have it for the show next November. 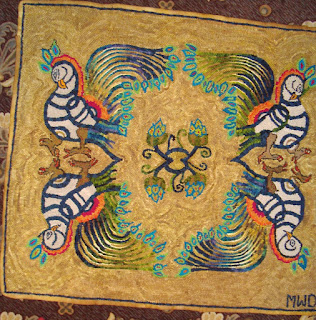 Peg Dutton hooked the 4 peacocks rug and love how that background makes the other colors pop.  It is prettier in person, as is always the case. 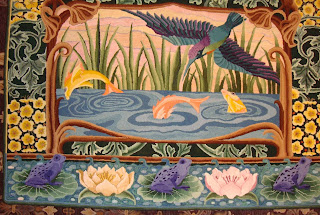 The rug above with the purple frogs is an unknown hooker too, sorry. 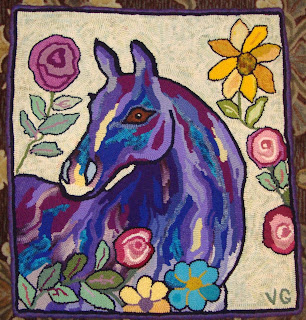 Sadly don't know who hooked the purple horse either.  Even with the initials VG doesn't help me since I only have names and emails of the people in my particular class. 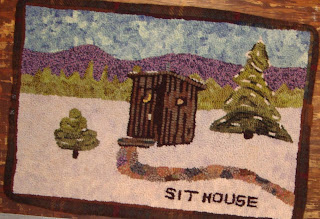 Grace Ayers hooked the Sit House piece at camp last year.  I thought the name of the out house rug was a hoot. 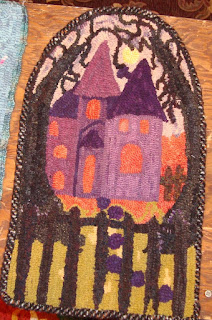 That spooky house and gate piece is cute and while I don't know who hooked it wonder if it was done in Lisanne's class last year. 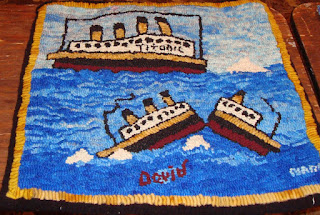 The Titanic rug above caught my attention and wonder if it has a special meaning as to a family member who may have been on that voyage oh so many years ago.

Okay, remember in a previous post told you the name of Pam Mandus would pop up again?  When I saw this rug in the show (the one below) it blew my mind.

As you can see she titled it "365: A Year's Journey in Rug Hooking". There are 1" squares hooked in tiny strips using her narrow cut worms. Most likely there are some blocks which have specific meaning for the day she hooked the squares.  What a treat it was to feast my eyes on that rug.....uh, not that I'd want to tackle such a rug myself, but thought the concept was awe inspiring.

Hope you have enjoyed the rug show.  Tomorrow I'll show pictures of the throw down show.