Ben loves to ride in the van, although encountering vehicles passing or crossing our path still gets him agitated.  I wasn't looking forward to the ride to the vet as Ben was having a spot removed from his under belly.  It was me upset about him more than the spots I've had removed from me.  As a human we understand the procedure but not my boy.

He was delivered to the vet before 8:30 a.m. and the first surgery of the day it was a minor spot removal.  Minor still isn't a comforting word when this is your major companion.

Ben's surgery was done by about 9:30 a.m. and picked him up about 10:30 a.m.  Since the surgery was on his underbelly placed a soft fabric on top of the van floor before picking him up. I didn't want any rough surface scraping against the wound.

As I couldn't coax him out of the van decided to put a cup of water in there and check on him every 15 minutes to be sure he was okay. 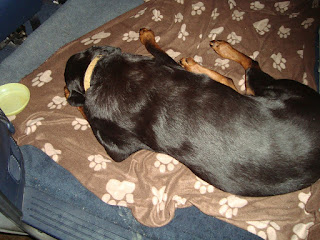 Another view of my boy Ben from the other side of he van.  You can see he is still on drugs. 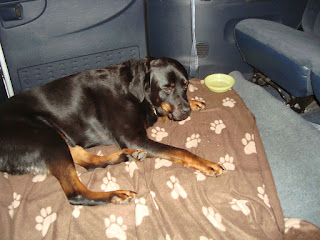 The child gate is placed between the front seats and back so that Ben wouldn't attempt to climb in the front. 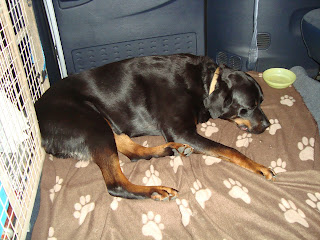 Eventually was able to coax him into the side yard with a leash from the van where he relieved himself.  He immediately went back into the van. Perhaps  to him it was sorta like his safe cave.  I continued to check on him every 15 minutes.

Finally was able to get Ben inside the house.  Since the doctor told me there could be some spotting from the belly decided to put a light colored piece of flannel on the area near me so I could see just what spotting occurs.  My boy is still not fully alert. 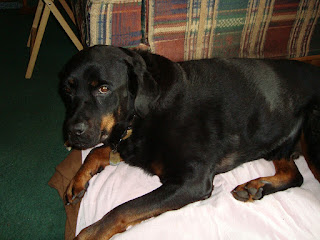 Finally was able to get Ben off the light mat with a kong filled with a cookie.  That way could see if there was the oozing the vet expected from his belly.  there are a couple small spots but nothing to worry about. 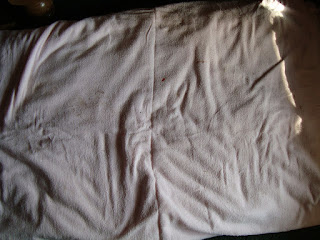 Ben is still out of it and while he was interested in the Kong with a cookie put inside he wasn't alert enough to figure out how to get it out. 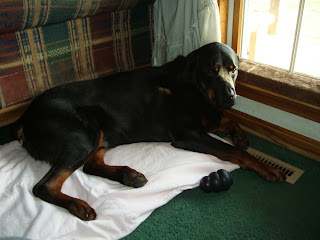 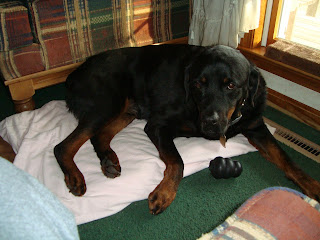 This morning he is more alert and on antibiotics.  He is not supposed to jump or run for a week so am hoping we are able to avoid any vehicles in the development.  Also hope the squirrels stay at bay in the back yard. 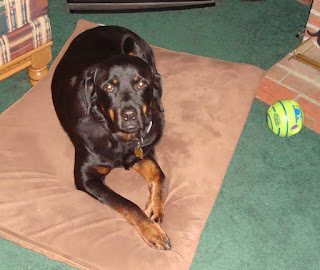 We should get the biopsy report in about 5 days.  HappyWednesday everyone.

Saundra
Posted by Saundra at 8:51 AM